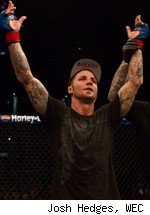 Ask 100 MMA fans to name the former WEC bantamweight champion from Indiana, and all 100 of them are liable to say Miguel Torres. And while the Torres response is true – and certainly understandable – Eddie Wineland might have something to say about that.

Wineland was the WEC's first champ at 135 pounds. He won the belt at WEC 20, knocking out Antonio Banuelos for the title. But that was in the WEC's pre-Zuffa era, before the big TV deal with Versus and really before "MMA" was a household term. Casual fans not really knowing him could be forgiven. Besides, he lost the belt less than a year later in his first defense at WEC 26.

But on Sunday, at WEC 49 in Edmonton, Alberta, Canada, Wineland goes after his third straight win, and he'll do it against Will Campuzano to open the televised card on Versus – the latest step on his goal to get another crack at the title.

"You always want to be on the main card – everybody always wants to be seen," Wineland said. "But whether I'm the first fight or the last fight, as long as I'm there and I get to fight and I get that win, that's really all that matters."

After he lost his title to Chase Beebe in 2007 – who would go on to lose it to Torres – Wineland (16-6-1, 3-2 WEC) spent two years outside the WEC. He picked up a championship in the Indiana-based Total Fight Challenge and kept working a full-time gig as a firefighter and a part-time gig at a caster fitting company – a blue-collar story not untypical in Northwest Indiana.

But after two years away from the WEC, what he wanted was another crack at the big show. It came against Rani Yahya at WEC 40 practically in his backyard in Chicago. But the fight was over almost as soon as it started, with Wineland getting caught and tapping to a rear-naked choke.

Since then, though, things have been looking up. Wineland kept honing his boxing, and it showed with a unanimous decision win over Manny Tapia at WEC 43. And in January, Wineland took the much taller George Roop the distance, again using an effective counter-striking approach, earning his second straight win and second straight 30-27 sweep of the judges' scorecards. 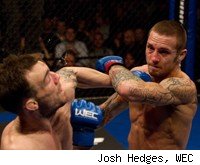 Those wins put him in the Top 10 on some bantamweight rankings – even ahead of Torres, whom he has trained with in the past. And a win over fellow Top 10 fighter Charlie Valencia certainly would have had him in sniffing distance of the term "title mix." But Valencia had to pull out with an injury, leaving the less-experienced Campuzano in his place.

"I think the Valencia fight would've been exciting, and it would've been fun, and yeah, it would've been a good win and a tough fight," Wineland said. "But Will's got a good record, he's fought some good people. He likes to throw, I like to throw. He's been around – eight fights is not considered a rookie in my mind."

"The bantamweight division is loaded with talent, but Eddie is right in the mix," Harris said. "If he keeps performing the way he has been, he'll work himself deeper and deeper into the mix. He's only 25. He has shown a lot of promise lately. He wants the belt back and it will be fun watching him work his way toward another shot."

With a win Sunday over Campuzano, Wineland would likely start seeing some bigger names as potential fights to inch closer to that shot – names like Takeya Mizugaki, Scott Jorgensen and Urijah Faber now that he's in the division. And there's even the possibility of Torres, who has lost two straight – a fight Wineland has said in the past he would only take if the money was right and, likely, if a title was on the line.

Even though his foremost goal is to keep racking up wins, with his first Versus appearance – and a chance to introduce himself to some new fans who might not know he once held the hardware – Wineland said he'd love to pick up a bonus check as the icing on the cake.

"I always look to finish," Wineland said. "Everybody who knows me knows that the win I want is the knockout. But I'll take a choke, I'll take a knockout, I'll take a TKO. However he wants it and whatever he gives me, I'll take it."

WEC 49: Varner vs. Shalorus is the WEC's debut in Canada. The main card airs live on Versus at 9 p.m. Eastern.