'The New Keith Jardine' Ready for Rebirth Against Matt Hamill 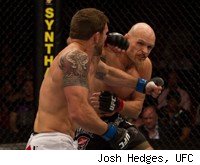 With wins over Forrest Griffin, Chuck Liddell and Brandon Vera on his resume, one would think Keith Jardine was past the "coming into his own" stage of his career.

With three straight losses – and four in his last five – heading into his Saturday fight against Matt Hamill on "The Ultimate Fighter" live season finale in Las Vegas, it would be natural to think the UFC light heavyweight was frustrated or even concerned about his future. But Jardine chalks the losses up to a simple slump.

"I've been going through some growing pains and I've been in a little bit of a funk," Jardine said Wednesday on a media call for Saturday's fight. "And I needed to go through those pains to get to here. I've showed glimpses of greatness. I knew two years ago, I beat Forrest, I beat Liddell, I beat those guys. But I knew I wasn't the fighter I wanted to be. I knew I wasn't ready to carry the UFC torch yet."

Jardine's last four losses haven't exactly come against slouches. He took Rampage Jackson to a decision at UFC 96. But he was finished by Wanderlei Silva, Thiago Silva and Ryan Bader. And it is the knockout losses, especially, that had Jardine realizing he needed to make some adjustments to his style.

"A lot of times, I got caught because I was trying to be too orthodox, too clean – like I read a how-to boxing book," Jardine said. "(I was) a little bit too planned in everything I was doing. Now I'm just more relaxed – just flow free and have fun."

Jardine (15-7-1, 6-6 UFC), who got his UFC start on Season 2 of "The Ultimate Fighter," trains with Greg Jackson in Albuquerque, N.M., and Jackson was one of the coaches he had to turn to in an attempt to figure out his funk.

"I had to sit down with my coaches and say, 'Look, man, something's wrong here. I can't possibly work any harder than I've been working for these fights. I can't train any harder, but something's wrong. This is not just a freak thing anymore. We need to find out what it is,'" Jardine recalled. "And I think we've done that. I'm sure we've done that. And I'm sure that I'm ready for a rebirth."

Their answer? Jardine just may have been thinking too much.

"Sometimes you get worse before you get better," Jardine said. "I tried to be too polished and I tried to be too planned in everything I was doing, and I think that's come full circle now. And I think I'm ready to let loose and exhibit a lot of the stuff I've been doing."

Hamill (8-2, 7-2 UFC) is coming off a controversial win against Jon Jones in which he was dominated – but won by disqualification for illegal 12-6 elbow strikes from Jones. In that fight, he suffered a separated shoulder, but said Wednesday he is fully healed.

And against Hamill, Jardine will again face an opponent with a world-renowned wrestling pedigree. Bader was an NCAA All-American wrestler, though ultimately it was his striking that put Jardine on the mat to stay at UFC 110. And Hamill was a NCAA Division III wrestling champion with Olympic-caliber skills.

But Jardine said he won't be thinking about Hamill's potential to get the fight to the ground.

"Matt does have different takedowns than Bader – he has a lot different technique," Jardine said. "This fight's been more about me than Matt Hamill. Matt Hamill brings some really good stuff to the table. (But) this training has been more about getting me to where I need to be, and just trying to have a little more fun and trying to be a little more free in my boxing and my wrestling and jiu-jitsu. Just about the new Keith Jardine."

The "new Keith Jardine" says he feels rejuvenated and refreshed. Saturday will tell if he has wiped the slate clean and is starting anew, or if he has to go back to the drawing board again. But at least now he knows what he has to do.