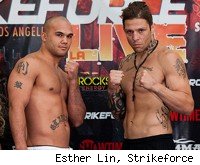 LOS ANGELES, Calif. -- This is the Strikeforce live blog for Robbie Lawler vs. Renato "Babalu" Sobral, the main event of tonight's Showtime card from the Nokia Theatre.


Round 1: Sobral claims the center of the cage and, after a brief exchange, locks Lawler up in the clinch against the fence. After some ineffectual knees, Big John breaks them up. Seconds later Lawler lands a good punch, his first significant blow of the fight. Sobral wants this fight in close, but Lawler is circling away from him and looking to land the big shot. Sobral manages a takedown, but Lawler is back up quickly. Sobral counters a Lawler leg kick with one of his own, and puts Lawler on his back briefly. Josh Barnett is in the crowd, shouting instructions and encouragement for Sobral. Lawler and Sobral trade punches in close before the end of the round, with Lawler likely getting the better of these exchanges when they happen. MMA Fighting scores the round 10-10. Not popular, but it feels right.

Round 2: A kick from Sobral stings Lawler, but Lawler comes back with a left hand to give him something to think about. Sobral tries for a takedown, but Lawler avoids it without much trouble. Sobral presses forward with kicks and punches, and Lawler plays possum for a moment in an attempt to draw him in, but Sobral sees through the ruse. Sobral comes forward behind his jab and Lawler answers with a hook. Sobral pulls his head down for a nice knee, but Lawler is unfazed. Sobral definitely has the advantage from range, but Lawler is looking to load up on that big left hand as the round ends. MMA Fighting scores the round 10-9 for Sobral.

Round 3: Sobral is jabbing and moving to start the third, and looking for the clinch and takedown when Lawler comes forward. Single-leg attempt from Sobral earns him nothing but arm-punch uppercuts from Lawler. A spinning backfist from Sobral excites the crowd, but doesn't get through Lawler's defenses. Sobral sticking with a diet of kicks and jabs at the moment, and Lawler is content to avoid them and look for the one-punch KO. Lawler comes on hard in the final minute, backing Sobral up with right hooks and just missing with the big left. Lawler may have stolen the round with his aggression in the final minute. MMA Fighting scores the round 10-9 Lawler. For you math experts, that would be a draw on our scorecard.