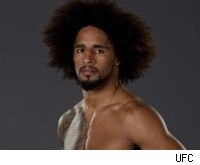 LAS VEGAS -- Jamie Yager knows that when he walks into the Pearl at the Palms to make his official UFC debut on Saturday night, he'll be facing a crowd in the arena and an audience at home that has largely already made up its mind about him.

What bothers him is that, at least the way he sees it, they don't know the guy they're judging quite as well as they think they do.

"America thinks they know who you are based on a really small sample," Yager said. "We filmed 6 weeks, 24 hours a day, and they showed 12 hours. Not even 12 hours [with commercials]. 44 minutes every week."

This isn't exactly a new claim for a reality TV show participant. From "The Ultimate Fighter" to "The Real World" to "The Littlest Groom" (Google it), editing has been the scapegoat of many an unwilling reality TV villain unhappy with how they came off on TV.

Share For Yager, it's a sword that cuts two ways. The notoriety he gained as a larger-than-life loudmouth on TUF 11 may have turned some MMA fans against him, but that's not always a bad thing in this sport. As long as people want to pay to see you, it doesn't matter so much whether they're hoping to see you win or lose, and Yager knows it.

"It's a little frustrating, but by the same token, some noise is better than no noise. I think I was kind of a victim of the editing process. Not necessarily victim in the sense that I've been hurt or injured by it, but I wasn't really depicted as who I really am. Everybody in the house got into it with everybody else, but they just showed me. I think the end justifies the means though, because with the editing, like it or love it or leave it, I'm on the main card now."

Whether you agree with the process, you have to admit that Yager has a point with regards to the outcome. At least so far.

On Saturday night in Las Vegas he takes on Rich Attonito, a fellow "Ultimate Fighter" participant who was knocked out of the competition with a hand injury. As Yager sees it, Attonito wouldn't be on the main card at all if not for him and the fan interest surrounding him.

"It's because of all the hype, the hair, the image, all of that," said Yager, who added that his 'do has earned him comparisons to Sideshow Bob and the occasional nickname, "Fro Cop."

But if Yager's persona as depicted on the show didn't grab enough fan attention, his allegedly non-existent feud with coach Tito Ortiz via Twitter certainly did.

Yager still insists that he is not the owner of the Twitter account which blasted Ortiz for questioning his heart and his courage after Yager failed to answer the bell for the third round in an elimination fight with Josh Bryant. Even if it was a fake account though, that doesn't mean the real life Yager is any happier about seeing Ortiz call him an assortment of unfavorable names on national TV.

"To see Tito pick me up on his team and when I'm winning he's like, 'Now we're back in it, we got this, yeah!' and the second I lose he's on the other side of the fence, you see him flip-flopping," Yager said. "I'm the type of guy who, if I pick you up and take you in, through the good and bad we're going to ride it out together. It shows a true test of his character. It's not a character flaw in me; it's a character flaw in him."

The feud between himself and Ortiz is settled now, Yager said. He called Ortiz after seeing an advance screening of the show before he was due to sign autographs alongside his former coach at the most recent UFC Expo.

Now the issue for Yager, as it is for every fighter who makes a splash with his mouth instead of his fists on the UFC's reality show, is whether he can deliver in the cage when it counts. A loss against Attonito, and his run in the Octagon may be cut very short. He may also be remembered as another figure who made the show briefly interesting, but failed to live up to expectations when the pressure was on.

Think Junie Browning. Or even Kimbo Slice. Reality TV stardom is much easier to achieve than UFC stardom, and with good reason.

But with his moment of truth approaching fast, Yager said all that's on his mind is getting the win and putting on a show. If he can just do both of those things, the rest will take care of itself.

"I'm looking forward to going out there and fighting and putting on an entertaining fight, because I realize this sport is not just fighting," he said. "This sport is entertainment. If you're filling the seats and putting on exciting fights, you're going to stick around. I'm definitely here to stay."