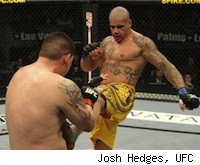 You won't hear this often in the fight game, but James McSweeney is pretty sure that breaking his hand in the opening moments of his first official UFC bout was one of the best things that could have happened to him.

Not that it felt that way at the time. When it actually happened, during one of the first punching exchanges between McSweeney and Darrill Schoonover at December's "Ultimate Fighter" Finale, what he felt was sickening pain.

"I knew it was bad. I felt a crunch, and I felt the pain move all the way up my forearm," McSweeney said. "It wasn't until two or three punches later that I really knew it was broken."

The upside was that with his stand-up game now compromised, McSweeney was forced to try something else. He'd been drilling his wrestling and jiu-jitsu in the gym, but didn't yet have enough faith in those skills to use them in a fight.

Share Instead he had leaned on his considerable skills as an experienced kickboxer. He leaned on them a bit too much, he realizes now. But with that weapon gone due to the hand injury, he had no other choice but to try something else.

"My plan then became to get him to the ground, work some elbows and wear him out. I never would have done that if my hand hadn't have broken. It was a blessing in disguise, to be honest. That gave me so much more confidence in using the techniques I'd learned in the gym, using my jiu-jitsu, and I never would have found that confidence otherwise."

The plan worked. McSweeney went on to score a third-round TKO against Schoonover, which bought him some time in the UFC. Knowing the way the UFC tends to view undercard bouts between TUF contestants – the winner usually gets to stick around, while the loser often doesn't – he wasn't about to let a broken hand stop him.

"I was under no illusions there," said McSweeney. "I knew that if I lost that fight I was going to be out. I don't know about this fight. I have my contract, but you could be anybody if the UFC and if you lose two or three in a row, you could be out of a job. But I don't mind that pressure. I feel like that's the kind of thing that makes you work harder in training."

That kind of determination should come in handy this Saturday night when McSweeney takes on UFC newcomer Travis Browne at the season eleven Ultimate Fighter Finale in Las Vegas. The 6'7" Browne brings an undefeated record into the Octagon. On paper, at least, it looks far more impressive than McSweeney's 4-4 mark.

What Browne doesn't have is any UFC experience. McSweeney may only have one official bout in the Octagon and the three fights on the reality show, but he also possesses a wealth of big fight experience as a kickboxer, where he won several titles and competed in front of packed houses for K-1.

Fans who have only seen him in his reality show experience may not expect much out of him, McSweeney realizes, but that's because they're using a flawed metric to judge his abilities.

"It's a little frustrating, but fans are fans. They're passionate either way. I was at the [UFC] Expo and all the fans who came up to me, there wasn't one negative remark. Then you go on the internet and read what people say and it's like, wow, they sure think they know a lot about you based on a couple fights in that house. The thing is, you don't have your normal preparation, your training partners, your teammates. There's just nothing in the house that's like how it is getting ready for a fight outside of it."

These days McSweeney has the advantage of a training camp that includes guys like Rashad Evans, Nate Marquardt, Shane Carwin, and Keith Jardine. He has the ability to stand and bang, as well as the confidence to work off his back if he needs to.

He also has the added motivation of going into this bout knowing that his spot on the UFC roster is still anything but secure. His opponent may be bigger and stronger, and he may possess a more impressive record, but McSweeney has no intention of helping Browne to become the next big thing in the UFC.

"He may have a lot of knockouts on his record and I'm sure he'll come out and want to start fast," McSweeney said. "But I've got no intention of getting knocked out. I'm not going anywhere."