Cavalcante vs. Kikuno, Manhoef vs. Mizuno Booked for DREAM.15 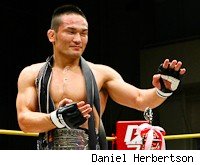 DREAM Executive Producer Keiichi Sasahara unveiled two more fights for DREAM.15, the card of "Fated Rivals" on Thursday. Along with the highly anticipated Shinya Aoki vs. Tatsuya Kawajiri title match, former top lightweight Gesias "JZ" Cavalcante will look to get back on track against a rising star in Katsunori Kikuno and Melvin Manhoef will return to the ring against a Tatsuya Mizuno as part of DREAM's four-man, light heavyweight tournament.

Also participating in the tournament will be former Strikeforce light heavyweight champion Gegard Mousasi although an opponent has not yet been named.

Gesias "JZ" Cavalcante was once considered one of the best lightweights in the world, taking out the the 2006 and 2007 K-1 HERO'S 70 kg tournaments but is yet to pick up a win within the DREAM ring. A knee injury has been bothering the ATT product since late 2006 and perhaps led to this slump in performance, losing to both Shinya Aoki and Tatsuya Kawajiri along with a no contest with Aoki.

Katsunori Kikuno is one of the most interesting prospects in all of MMA. A kyokushin karate fighter with an hourglass stance and a "one-hit certain-kill" crescent kick, Kikuno doesn't fit inside the mold of the conventional modern mixed martial artist. While his style may be unorthodox in the modern MMA world, it is definitely effective, leading to him capturing the DEEP lightweight title with a pair of crushing KO wins under the DREAM banner and giving Bellator Champion Eddie Alvarez a genuine scare.

Although Tatsuya Mizuno has been training in Seattle with Matt Hume for the past three months, he will face a stiff test in Melvin Manhoef. Mizuno may be best known for being the heavy bag brought in at DREAM.1 for an uninspired Mirko "CroCop" Filipovic. Melvin Manhoef is best known for turning people into heavy bags.

One of the most powerful strikers in all of MMA, regardless of weight class, Manhoef was on the way to a dominating victory over for Elite XC Champion Robbie Lawler back in January before getting caught with an overhand right that put him out cold. On New Year's Eve 2009, Manhoef destroyed Kazuo Misaki within two minutes. This is the story of Manhoef's career. Either destroy his opponent or get KO'ed or submitted in the process.

The Manhoef vs. Mizuno bout is being billed as a "one match," but in fact is part of a four-man light heavyweight tournament in which former Strikeforce champion Gegard Mousasi will also be participating. Mousasi's opponent has not yet been decided but it will be a non-Japanese opponent.

It was originally hoped that Strikeforce Heavyweight Champion Alistair Overeem would also participate on the card but an opponent has not been found. Five or six more fights are yet to be announced.