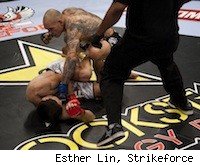 I've never been to an MMA event quite like Wednesday night's Strikeforce: Live show in Los Angeles. Whether that's a good thing or a bad thing, I'm not sure, but at least it's something different.

For instance, according to the Nokia Theatre website, Justin Bieber is playing there in about a month. Unlike Strikeforce, which packed in 5,259 fans last night (according to Scott Coker) Bieber's show is already sold out.

Things were made more bizarre by the fact that the event was held on a Wednesday night (to draw the E3 crowd), and the preliminary portion of the card was two-fights long and ended before most fans could even buy a cold beer and find their seats.

Again, that's not necessarily such a bad thing. I can't remember the last time I covered an MMA event and got to bed at such a decent hour (I'm typing this on almost four full hours of sleep!!). If nothing else, last night's event gave fans something they hadn't seen before, in more ways than one. Even if they didn't get so much quantity for their money, they can't complain about the quality.

Biggest Winner: Evangelista "Cyborg" Santos
Santos has the distinction of being the only fighter in MMA who can get a kiss from his wife right before a fight and then get carried around the cage by her – for an extended period of time – afterwards. His knockout win over Dream champ Marius Zaromskis was the most exciting finish of the night, and it signals good things to come for Santos at welterweight. Even the female Cyborg approved of his performance, and she doesn't seem like a lady who's easily impressed.

Biggest Loser: (tie) Marius Zaromskis and Dream
"The Whitemare" started fast, as is his style, but he wasn't prepared for the blows that came back at him. That's two knockouts in two fights since the Dream champ came to the U.S., which doesn't do a lot to help the stateside reputation of Zaromskis or Japan's top MMA brand.

Best Losing Effort: Conor Heun
As Heun exited the cage after losing a split decision to KJ Noons, his face did not resemble that of a man who had won all three rounds, even if he did, according to one judge. Even though he lacked Noons' boxing skills, Heun hung in there and fired back all night long, making a close fight of it even when he couldn't get it to the mat. He's not doing his looks any favors with that fighting style, but he is making a compelling case for Strikeforce to keep bringing him back, win or lose.

Worst Game Plan (or Lack Thereof): Robbie Lawler
As Lawler admitted in the post-fight press conference, his goal from the first horn to the last was to land one big blow and knock Sobral out. That's somewhat understandable, considering how many times that has worked for him in the past, but it's not so much a strategy as it is a kind of faith. Lawler has cold-clocked too many people for his own good, and now he thinks it's the answer to every problem. The good news? He seemed to have learned that lesson with last night's loss.

Best Post-Fight Attempt at Self-Imposed Matchmaking: Renato Sobral
"Babalu" doesn't want to fight his buddy, "King" Mo Lawal, for the Strikeforce belt, and that's his prerogative. But instead of just shooting the idea down and leaving Strikeforce with no other options, he was savvy enough to suggest a fight with Dan Henderson. With Hendo coming off a loss and Sobral squeaking out a win, I'd say it sounds like a great idea. Meanwhile, why not pit Lawal up against the heavy-hitting "Feijao" Cavalcante?

Biggest Hype Bubble Burst: KJ Noons
Noons didn't look bad in his win over Heun. He also didn't look like a fighter who could last more than two rounds if he were to rematch Nick Diaz, which seems almost inevitable. That's not to say that he has anything to feel bad about after the way he fought on Wednesday night, but it is reason enough for Diaz to be drooling over the prospect of getting his hands on Noons right now.

Most Compelling Story of the Night: Tim Kennedy
Home from the wars and now training full-time, Kennedy seems like a fighter with frightening potential. He's also a genuine American hero, with an apple pie smile and an 'aw shucks' quality about him. That's everything you could ask for as a fight promoter, and Scott Coker knows it.