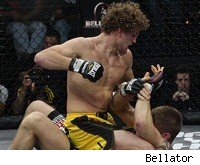 There's no doubt about it: Ben Askren is one of the best welterweight prospects in mixed martial arts.

With his wrestling base, it's no surprise that Askren wanted to keep the fight on the ground. But it is a surprise how easily he was able to control the fight on the ground against Hornbuckle, who's very good off his back. Askren got things started by grabbing Hornbuckle's leg and securing a great takedown to put Hornbuckle on his back. Staying on top of Hornbuckle on the ground, Askren landed repeated knees to the body. With a minute to go in the first round Askren got to full mount, and Hornbuckle was just hanging on for dear life. When Askren started to land punches Hornbuckle managed to buck Askren off, but it was an easy round to score for Askren, 10-9.

Hornbuckle landed a hard punch to start the second round, but Askren quickly planted Hornbuckle on his back again. By the midway point of the second round Hornbuckle's face was bloodied, and although Hornbuckle did briefly threaten Askren from his back, Askren dominated almost all of the round once again.

Fifteen seconds into the third round Askren tackled Hornbuckle and started in with the ground and pound. But Hornbuckle, showing how great he is off his back, did manage to threaten Askren with a kimura. Ultimately, however, Askren was just too good on the ground. Hornbuckle had no answer as Askren stayed on top of him and ended the fight on top.

Askren addressed the champion after the fight.

"Lyman, keep my belt warm," Askren said. "Shine it once a week and enjoy it while you've got it because it's mine."

All three judges scored the fight for Askren by identical scores, 30-27. There was no doubt about the judges' decision in this one, just as there's no doubt that Askren is for real.