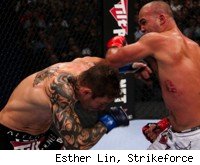 A good fight at Strikeforce: Los Angeles Wednesday night ended with a very close decision, as Renato "Babalu" Sobral battled Robbie Lawler for 15 minutes and did enough to convince all three judges that he won two rounds.

The judges' decision -- 29-28 all around -- could have easily gone either way, but Babalu did just enough to win, and he said afterward that he's hoping to fight Dan Henderson next.

Lawler cut Sobral on the bridge of the nose early in the first round with a good punch, and he was getting the better of the exchanges on the feet in the early going. Sobral appeared to have his opportunity when he secured a takedown with two minutes to go in the first round, but Lawler shook Sobral off and got back to his feet easily. A few seconds later, when Lawler slipped on a kick and fell to the ground again, he again had no trouble getting back to his feet.

More: Strikeforce Results | Strikeforce News
Early in the second Lawler showed how much his takedown defense has improved, as Sobral tried to secure a single-leg takedown and Lawler hammered away while hopping on one foot. During an odd moment a minute and a half into the second round, Lawler appeared to be hurt and was staggering around the cage, but Sobral oddly didn't attempt to capitalize. Sobral did land a couple of right kicks to the body that created a big purple welt on Lawler's left side, but he wasn't as aggressive as he should have been in the second.

In the third round Lawler started peppering Babalu's face with punches, opening up cuts and blackening Babalu's eye. But Babalu wouldn't quit and did a nice job of connecting to the body. By the end of the third both men were completely exhausted, and when the final horn sounded they celebrated but also looked relieved

Sobral improved his record to 36-8. One of those eight losses came against Henderson in Japan in 2000, and now Sobral is hoping to get a rematch. That would be a big fight for Strikeforce.