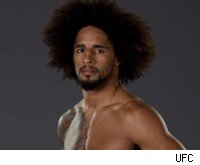 While Team Punishment's Yager was nowhere on the level of Junie Browning villainy on the show, the talkative, afro-sporting 26-year-old out of Pasadena, Calif. was this season's controversial figure, often portrayed as confrontational and brash.

"They made Jamie way worse than he actually was," said McGee of Team Liddell. "Way worse."

Early in the show, McCray formed a bond with Yager along with Brad Tavares and Kyle Noke, self-described as the "Minority Report." McCray had his unflattering moments as well, but felt Yager was given the most heat from the editors.


Share
"Yeah, I think they got him a little bit worse than he actually was," McCray said following his opponent's comments. "We were definitely -- I know I was loud, but for me, it was all in good fun. I never about called anyone out or names and stuff like that. Yager has a mouth on him. He's going to be opinionated."

Yager's name hasn't strayed from controversy following the tapings. Earlier this month, Yager was linked to insulting and cussing out Team Punishment coach Tito Ortiz on Twitter. However, Yager and his management would claim that the Twitter account was fake.

During competition, Yager would eventually quit on the stool in a semifinals matchup against Josh Bryant, but he'll receive one more chance in the UFC ranks this Saturday, facing Rich Attonito on the Spike TV broadcast.

Behind it all, McCray has said in the past that he believes differences between Yager and the team grew from the way Yager reacted towards catching flack from other cast members for his 2-1 record coming into the show.

"He's a totally different person one-on-one," McCray said. "That's the thing a lot of people were just gunning for him, they rolled that story to the sunset, so yeah, he has a lot to prove too ... It sucks and he was a bit of an a--hole and that's my friend, and I'll tell him to his face, but he wasn't that bad."