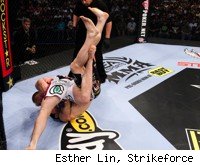 Tim Kennedy is an Army veteran, Bronze Star recipient and one of the best stories in mixed martial arts. And in winning his fourth straight fight with a first-round submission over Trevor Prangley at Strikeforce: Los Angeles, he showed that he's more than just a good story: He's an awfully good fighter, too.

Kennedy needed just three minutes, 35 seconds of the first round to get Prangley to submit to a rear-naked choke, putting on an excellent grappling display against an opponent who's plenty good on the ground himself. Kennedy picked Prangley up and planted him on his back two minutes into the first round, and from there it was just a matter of time before he got Kennedy's back and got him to tap.

The 30-year-old Kennedy, who improved his record to 12-2, isn't quite up there with the best middleweights in the sport. But in a Strikeforce middleweight division that will likely soon lose its champion, Jake Shields, to the UFC, Kennedy could soon be a title contender.He put on a good show Wednesday night.