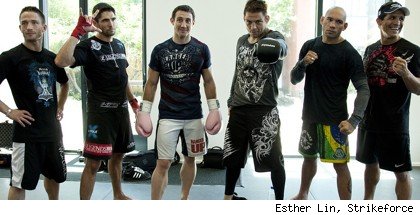 Strikeforce is back on Wednesday night with a four-fight card on Showtime that should deliver some exciting finishes, even though it isn't delivering a lot of particularly relevant match-ups. Matches like Robbie Lawler vs. Renato "Babalu" Sobral and Marius Zaromskis vs. Evangelista Santos are made because they've got the potential for explosive endings, not because they're going to shake up the Top 10 in any weight class.

If you like explosive endings, you're probably going to like this card. We've got the full preview and predictions below.

When: The Showtime card starts at 11 PM ET.

Robbie Lawler vs. Renato "Babalu" Sobral
This is a catchweight 195-pound fight that is likely to determine the next No. 1 contender for Strikeforce either at middleweight (if Lawler wins) or light heavyweight (if Babalu wins). More than anything else, that says a lot about how desperate Strikeforce is for No. 1 contenders after Jake Shields beat Dan Henderson for the middleweight title and Muhammad Lawal beat Gegard Mousasi for the light heavyweight title, but I like the Lawler-Sobral match-up anyway. Lawler is coming off a brilliant first-round knockout of Melvin Manhoef, while Babalu is fighting for the first time since Mousasi whipped him 10 months ago. Although I think the 195-pound catchweight benefits Babalu, I like Lawler to keep the fight standing, out-strike Babalu and win by TKO.
Pick: Lawler

Marius Zaromskis vs. Evangelista "Cyborg" Santos
Zaromskis is the Dream welterweight champion, but he hasn't fought in Dream since October and might not any time soon, instead stepping into the Strikeforce cage for the second time in 2010. Zaromskis lost to Nick Diaz in January, but Cyborg, the husband of the Strikeforce female star, is a fighter he should be able to handle. If Cyborg could get the fight to the ground he'd have a good shot of submitting Zaromskis, but I think this one will end quickly and violently, with Zaromskis coming out on top with a knockout.
Pick: Zaromskis

Tim Kennedy vs. Trevor Prangley
Prangley is returning to the cage for the first time since a disappointing draw against Karl Amoussou in February. I think he's going to be even more disappointed with Kennedy, whose boxing continues to improve and who should win this fight on his feet.
Pick: Kennedy

Conor Heun vs. KJ Noons
Noons left MMA for a couple years under the mistaken impression that he could make more money as a professional boxer. It's nice to have him back in MMA, where I expect him to make some noise in the Strikeforce lightweight division. Heun hasn't been fighting much lately, either; his last bout was a brawl with Jorge Gurgel that he lost by decision a year ago. I see this fight being a lot like that one, both guys standing and trading and Noons getting the better of the exchanges and winning a decision.
Pick: Noons