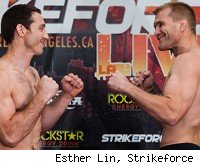 LOS ANGELES, Calif. -- This is the Strikeforce live blog for Tim Kennedy vs. Trevor Prangley, a middleweight bout on tonight's Strikeforce: Los Angeles card from the Nokia Theatre.

After a draw due to an unintentional eye poke in his last Strikeforce outing, Prangley looks to pick up a win against the former Army Green Beret Kennedy.


Round 1: Kennedy pressed forward and clinches Prangley against the fence. Prangley manages a nice judo throw to spike Kennedy on his head, but Kennedy scrambles up and looks for a single-leg. Prangley avoids it and they're back in the clinch, trading takedowns before Kennedy secures the top position in half-guard. Kennedy works some ground-and-pound, then mounts and takes Prangley's back as he tries to get to his feet. Kennedy looks for the rear naked choke and cinches it in tight. Prangley is forced to tap. Kennedy jumps off him and lets out a whoop of joy.

Tim Kennedy def. Trevor Prangley via submission (rear naked choke) at 3:35 of round 1.