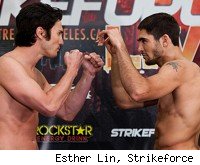 LOS ANGELES, Calif. -- This is the live blog for KJ Noons vs. Conor Heun, a lightweight bout on tonight's Strikeforce: Los Angeles card from the Nokia Theatre.

After an appearance at Dream.13 in March, Noons will make his Strikeforce debut against Huen.


Round 1: No friendly touch of the gloves to start, Heun charges right across and Noons ducks under his first punch. Huen lands a thumping right, and Noons responds with a jab that makes Heun consider a takedown. Hard uppercut from Heun. Noons is flicking out the jab, while Heun seems to be throwing the harder punches, tagging Noons with another uppercut when he dips his head down. A double-leg from Heun puts Noons on his back easily, and Heun moves to take his back and lock on the body triangle. Noons turns to the mount, but he's taking some big shots on the ground from Heun and his face is bloodied. Now Noons manages to push Heun off him and get back to his feet. A tired Heun stands up as well, but a hard right from Noons drops him to his knees just before the round ends. MMA Fighting scores the round 10-9 for Heun.

Round 2: A head kick attempt from Huen succeeds in getting him dumped onto the mat. Seems as though he may have worn himself out a little bit trying to finish Noons in the first. A good shot from Heun tags Noons and has him on the run for a moment, but Heun has definitely slowed down. Noons hurts Heun with a two-punch combo and tries to follow up with a knee, but Heun recovers quickly. They trade hard shots and then Heun shoots for a takedown that doesn't even come close. Now it's his turn to bleed, as Noons seems to be finding his range. Big knee from Heun, followed a few seconds later by a hard left book from Noons. Heun gets a takedown just before the bell, but I don't think it's enough. MMA Fighting scores the round 10-9 for Noons.

Round 3: Heun sticking with the head kicks to start the third, but they haven't done much for him so far. Noons stuffs a takedown attempt from Heun. A hard knee to the body from Noons is followed by a head kick from Heun that Noons blocks, but still appears to feel the effects from. Noons misses with a left and Heun lands a right just before the two clash heads. Heun shoots for another takedown, and then another, but Noons is having none of it. Heun looks very tired, but he's still coming forward and throwing hard, whereas Noons seems to have the jab whenever he wants it. Heun charges forward in the final minute to land a big right, but Noons is unfazed and comes back with several hard shots of his own before the horn sounds. Tough round to call. MMA Fighting scores it 10-9 for Noons.