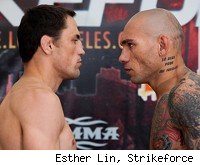 LOS ANGELES, Calif. -- This is the live blog for Evangelista "Cyborg" Santos vs. Marius Zaromskis, a welterweight bout on tonight's Strikeforce: Los Angeles card from the Nokia Theatre.

Zaromskis, the DREAM welterweight champion, looks to bounce back from a loss to Nick Diaz in January to face Santos, the husband of the Strikeforce 145-pound women's champion.


Round 1: No costumed entrance for Zaromskis tonight, but he looks focused nonetheless. He circles Santos in the early going before firing off a quick punch combo. Another combo from Zaromskis, followed by a head kick. Santos pushes him backwards with a straight right that makes his legs go a bit wobbly for just a second. Head kick from Zaromskis is answered by a leg kick and left hook from Santos. You get the sense this one is going to end violently with the way these two are pounding on each other, and it probably won't be too long now. Zaromskis charges in with a jumping knee attempt and Santos misses with a left hook before landing a right hand that puts Zaromskis down. A few more punches finish the matter, and Santos gets picked up and carried around the cage by his wife to celebrate the victory.

Evangelista Santos def. Marius Zaromskis via TKO (punches) at 2:38 of round 1.