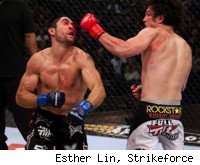 Noons, the former EliteXC lightweight champion who took almost two years away from MMA in a quixotic attempt to make it as a professional boxer, no doubt earned a lot of new fans with this fight, and he showed that he deserves to be considered a title contender in Strikeforce's lightweight division.

Heun charged Noons at the opening bell, threw punches, tried to take Noons down and landed a head kick, all in the first minute of the first round. But Noons was more effective and accurate with his punches, and by the midway point of the first round Heun's face was battered and bruised.

More: Strikeforce Results | Strikeforce News
Heun, however, secured a takedown with two minutes to go in the round and completely dominated Noons on the ground, getting into full mount and raining punches down on him. Noons looked close to being finished, but he actually managed to get back up to his feet in the closing seconds and drop Heun with a hard right hand at the end of a very exciting first round.

The brawling continued -- and got sloppier -- in the second round, as both Noons and Heun were swinging wildly and missing as much as they connected. Again, Noons landed the cleaner and more effective punches, and Heun began to look tired. Heun wasn't able to take Noons down until the final moments of the second round.

By the third round Noons had badly bloodied Heun's left eye and taken total control of the fight. Heun deserves all the credit in the world for continuing to fight even though Noons was dominating him, but there was no question that Noons won the third round -- at least, there was no question in my mind. One of the judges gave all three rounds to Heun, scoring it 30-27 for him. The other two judges scored it the same way I did, 29-28 for Noons.