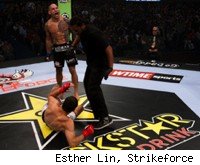 In a fight that was great for the couple minutes it lasted, Evangelista "Cyborg" Santos pulled off an upset victory over Marius Zaromskis at Strikeforce: Los Angeles.

Cyborg landed powerful leg kicks to set Zaromskis up, and big punches to wobble him. After taking a couple of punches, a frustrated Zaromskis made a big mistake, coming in out of control with a flying knee that Cyborg was ready for. With Zaromskis flying out of control, Cyborg leveled him with a huge punch, then landed two more on the ground before referee Herb Dean stepped in to stop it, just two minutes, 38 seconds into the first round.

Zaromskis is the welterweight champion of Japan's Dream promotion, but so far this year he's only fought in the United States for Strikeforce, and all he's done is get beaten down by Strikeforce fighters: First he lost to Nick Diaz by first-round TKO in January, and now he's lost to Cyborg. Zaromskis has fallen to 13-5, and he's made the Dream welterweight belt fairly irrelevant: A champion on a two-fight losing streak isn't much of a champion.

More: Strikeforce Results | Strikeforce News
Cyborg, however, is now 18-13 and on a two-fight winning streak. He looked good at 170 pounds and could be a future contender for the Strikeforce welterweight belt. His wife already has a Strikeforce title, and soon it might be the husband's turn.