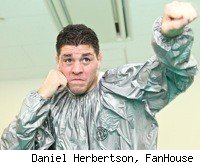 Nick Diaz and Jason "Mayhem" Miller were involved in an unofficial fight following Strikeforce: Nashville on CBS in April, but the veteran fighters might soon be meeting when it counts, according to Strikeforce CEO Scott Coker.

On Monday's edition of The MMA Hour, Coker said that the organization had already planned to match both fighters up, and despite the ugly brawl, that plan is still firmly in place.

"I think 'Mayhem' versus Nick Diaz was a fight we were going to promote anyway," Coker said. "It was just going to be a matter of time. So I think that fight will happen."


Share
Diaz is currently the Strikeforce welterweight champion, while Miller competes in the organization's middleweight division. Coker did not say which weight class the fight would be contested in.

Asked whether the next time we see Miller and Diaz will be against each other, Coker simply responded:

"I believe that fight will happen probably in the next eight months to a year."

According to Coker, both Miller and Diaz have been suspended for 90 days and fined by the Tennessee Athletic Commission for their involvement in the brawl. He said he has asked everyone penalized by the commission to agree to the terms so that the punishment does not drag out. The suspension is not retroactive to April 17, the date of the brawl.

(Ed. note: watch Coker's appearance on The MMA Hour below).