Michael Bisping Turns to Acting as He Awaits Next UFC Fight 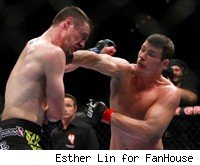 s no stranger to cameras, having won the third season of The Ultimate Fighter reality television show. But recently, instead of playing himself or an extension of himself, he's been in front of the camera and required to do something most athletes dread: memorizing lines.

Bisping can be seen later this year as the character Drake along with Bobby Lashley in the movie Beatdown.

But those worried about another fighter potentially defecting to Hollywood, need not be concerned. Bisping sees acting as a way to break up the monotony of day-to-day training as well as an additional source of income.


Share
"First and foremost I'm a fighter. That's what I love to do and that's what I'll always do," Bisping said. "I do have a lot of downtime in between fights. I spend all this time in the gym, but you can only do so much sparring and whatever."

The UFC middleweight was introduced to acting when he received an offer from his manager to participate in a movie, and decided, why not?

"I was a little dubious about it but went ahead and gave it a try and I'll give anything a try so I went along and did it," he said. "[I took] acting lessons. I actually enjoyed it believe it or not and I was pretty good at it. So I did that movie and it did very well and it led to a couple of other things."

During his call-in to The MMA Hour, Bisping was actually on his way to film his next role, a gangster -- in a soap opera.

"I'm expecting to get a lot of grief from the internet," he said. "It's not a novel soap opera, it's a daytime soap opera. I play a bit of a bad guy."

Last month at UFC 114, Bisping outpointed Dan Miller through three rounds to improve his own record to 19-3.

While not yet announced, the UFC is planning on returning to London, England on Oct. 16 for UFC 120, and Bisping is a likely candidate for that card.

He's currently waiting from UFC matchmaker Joe Silva regarding his next fight, but one fight he would surely be interested in would be another round with Wanderlei Silva.

"I'd love a rematch with Wanderlei," Bisping said. "I fought a good fight the first time. I let it go to the judges, but Wanderlei did a great job and he got the decision. It was very close and i'd love another shot at him, another chance to avenge that loss."