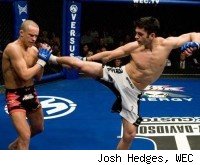 At 21 years old, Josh Grispi is a grizzled veteran with big wins on his record, a horrific injury in his past and now, he hopes, a stirring comeback story.

The kid they call "The Fluke" actually began his career as a kid. As in, he was underage. He was 17 and determined, so he fudged the truth a little bit about the nature of the competition, got a parent's signature and went off to chase a dream.

It was during his 18th birthday when everything started going wrong and right. He was legal now, so nothing could stop him from fighting (and that's exactly what he was doing on his 18th birthday), but it was also the day that his right ankle suffered an injury from a misdirected kick. Over the next three years, it would get progressively worse, to the point that when he finally had a thorough exam, his doctors recoiled in horror.

"How are you even walking right now?" one doctor asked.

The doctor might have been floored if Grispi had told him he'd fought on the thing. Not once. Not twice. Since the original injury had occurred in Oct. 2006, he'd fought 12 times. Twelve.

And not only that. He'd won. Over and over. In fact, by the time Grispi finally relented and committed to the surgery, he was 13-1, on a nine-fight winning streak and shooting up the world featherweight rankings.


Share
But the time had come to address the problem. Grispi knew that in the leadup to his last fight, what turned out to be a 33-second whitewashing of Jens Pulver. He knew he had to address it because in the days before the fight, he couldn't walk.

Yes, you read that right. Josh Grispi was preparing for the biggest fight of his life, and he could not walk. The pain was just too much. Amazingly, he barely considered the option of withdrawing from the fight.

"When I'd go through those thoughts, I'd get mad at myself for it," he told MMA Fighting. "I'd ice it, take ibuprofen and try to relax. I was used to pain in my ankle from before, but this time was a lot worse. I just had to tough it out in my brain."

The mindgames continued during the night of the fight, when the California state athletic commission informed Grispi that he would not be allowed to tape his ankle as he normally did, further compromising its stability.

But after defeating Pulver, he knew it was time.

"I was 20 years old and could barely make it down the stairs," he said. "I was in unbearable pain and everything I did, I had to try to overcompensate for my ankle. I realized this is wrong, and I have to do something to fix it."

The injuries he sustained in one ankle are about everything you can possibly do: torn ligaments, a torn tendon, a bone chip, inflammation, and calcium deposits around the entire bone.

"It was destroyed," Grispi said. "When I would kick, it was like there wasn't anything holding my foot to my shin. It was like it was coming separated. That was the worst thing. It was the worst pain in the world. I don't even want to think about it."

Grispi's hesitation about surgery mainly stemmed from his family's aversion to doctors, but judging from his record, this is also a man that doesn't like to waste time. Twelve of his 13 wins have come in less than one round, a stunning rate for any weight-class, but a true rarity among 145-pounders. But Grispi knew the surgery would cost him nothing so much as time.


Share
He quickly realized that since he took the time to undergo the surgery, he also needed to devote himself to properly rehabbing his injuries. Slowly but surely, the therapy began to work, and stability he hadn't felt in years began returning. Soon after, he began MMA drills to test it: sprawling and shooting. After those tests were passed, he knew he was ready to get back to fighting.

In his return at WEC 49 on Sunday, he faces L.C. Davis, a rugged veteran with a 16-2 overall record and three straight wins in the WEC.

"I'm looking at it like it's my first fight ever," Grispi said. "I'm real excited. I want to go out there and make a statement."

The opportunity is certainly there for him. Amazingly, despite the layoff, Grispi could still find himself in the featherweight title picture with a win, according to recent statements made by WEC general manager Reed Harris.

The belt in the division is currently held by 23-year-old Jose Aldo. For a while, Grispi and Aldo have been considered two of the weight class' top young stars, and many believe that the two are on an inevitable collision course. It's a situation he relishes. He's done all this damage on one good leg. What happens now that he's at full strength?

"I think eventually we're bound to meet up," he said. "A lot of people want to see it. We're bound to see it. But I'll keep fighting whoever they put in front of me. If they want me to fight Aldo, I'll fight Aldo. Whatever it is, I'll be ready. But eventually, it's going to happen."