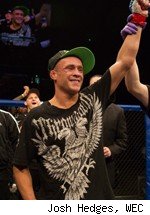 With the WEC's first foray north of the border, it was only natural the promotion put some Canadians on the card.

On Sunday, at WEC 49: Varner vs. Shalorus, the co-main event will feature a pair of Canadians who have been waiting the better part of a decade for a crack at each other. When Mark Hominick and Yves Jabouin square off, it will be a fight WEC general manager Reed Harris says was eight years in the making.

"Basically, this is a fight that's been trying to be put together for eight years," Harris said Monday on a media call for WEC 49. "Sean Shelby, our matchmaker, put it together and now we're going to get to see those guys finally go at it."

And in fact, it's really eight years and an extra six months in the making. The featherweight bout was originally booked for WEC 46 in January, but an injury forced Jabouin off the card.

As rising stars in the Quebec MMA scene in the early part of the last decade, Hominick and Jabouin were often mentioned in the same breath. And though they both fought for now-defunct Canadian promotions Universal Combat Challenge and TKO Championship Fighting, they never even fought on the same card, let alone against each other.

Jabouin, who honed his wrestling skills alongside UFC welterweight champion Georges St-Pierre at the TriStar Gym in Montreal, said the bout is a chance to take on a fighter he admires.

"This fight was supposed to be booked for about eight years now," Jabouin said. "Hominick used to be a superstar in my home town in Montreal. This is a guy I've been looking up to for years, and I would love to face him – and now I have the opportunity. I've been watching him forever. He's a great fighter." 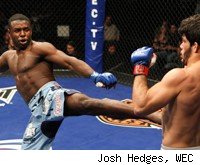 Jabouin (14-5, 0-1 WEC) came into the WEC last fall as a highly touted signee, thanks largely to that associating with St-Pierre. But he dropped his debut in a split decision to Rafael Assuncao at WEC 43, ending a four-fight winning streak. It was just his second career fight outside Canada.

Hominick (17-8, 1-2 WEC, 2-0 UFC) will be gunning for his third straight victory after submitting Bryan Caraway at WEC 46 in January. That fight was his return to the organization after a two-year absence that saw him fight just once – a win over Savant Young on the inaugural Affliction card.

Hominick said he believes he and Jabouin were meant to wait before they finally could square off.

"For me, things in life happen for a reason," Hominick said. "I think that's why this fight's happening at this point in my career on this stage. This is where I feel I perform the best – under the bright lights. And this is the kind of fight that I want. You're going to get two strikers that are going to stand in the center of the ring and go at it. So for the fans, I'm glad they put it on the televised portion because they're going to see one hell of a fight."

WEC 49 takes place Sunday from Rexall Place in Edmonton, Alberta, Canada, and features a main event lightweight fight between former champion Jamie Varner and Kamal Shalorus. Harris said Monday the winner of that bout is likely to face current champion Ben Henderson for the title. The main card airs live on Versus at 9 p.m. Eastern.