Claude Patrick Has a Legitimate Gripe About UFC 115 Submission Bonus 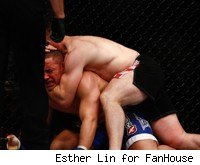 Publicly, UFC fighters will always tell you that they don't count on receiving an end of the night bonus check. Privately however, they're looking at their counterparts on each fight card and calculating their chances of pocketing some extra cash.

UFC newcomer and Canadian MMA veteran Claude Patrick admitted as much in a post on the Underground Forum earlier Tuesday, where he wrote that he had sized up the lineup and concluded that the Submission of the Night bonus would likely be awarded either to himself or fellow submissions expert Mike Pyle.

Of course, that's not how it went down, and the end result was both Patrick and Pyle going home somewhat disappointed after the UFC elected to award Mirko "Cro Cop" Filipovic the $85,000 bonus for Submission of the Night at UFC 115.

In what Patrick described as a "once in a life time type convergence of circumstances" that "cost me a lotta money," Cro Cop submitted Pat Barry with a third-round rear naked choke that wasn't exactly a textbook display of technique. He then took to the mic and gave a brief speech that ended with him not so subtly suggesting that UFC president Dana White give him the Submission of the Night bonus for the finish.

As Patrick deftly put it: "mirko takes 2 knock downs and comes back to do two things totally out of character 1- submit an opponent and 2- take the mic and start talking... ...right there my heart broke starting to think this man may have really got sub of the night."

Patrick stopped short of calling the bonus unjustified, which is smart. Dana White isn't a man who suffers complainers gladly, after all. But the truth is that Patrick has a point. From a technical perspective, Cro Cop's choke was nowhere near as slick as Patrick's guillotine choke submission of Ricardo Funch or Pyle's triangle choke finish of Jesse Lennox.

Obviously, the UFC can award the bonuses to anyone it likes, for whatever reason it likes, and Dana White's under no obligation to consult an Abu Dhabi champion before deciding which submission finish was most bonus-worthy.

At the same time, you have to wonder whether Cro Cop would have been awarded the bonus if a) he didn't specifically ask for it, and b) it wasn't such a rare occurrence for him.

Seriously, this is a man who has made more opponents tap with strikes than with submissions in his career. Seeing him finish a fight with a choke is a little like seeing Demian Maia knock someone out with a head kick. It's a novelty, but does that alone make it good?

As Patrick pointed out in his forum post, Cro Cop is a legend of the sport who has earned his respect. His comeback win against Barry certainly felt like it was worth a little extra money, and it was smart of him to put White on the spot with his post-fight comments. That's likely little consolation to the prelim fighters who battled just as hard, and for considerably less money.

It may not sound like it's an issue worth arguing about, and maybe it's not. Then again, you might feel differently if it was you who had just lost a shot at $85,000.