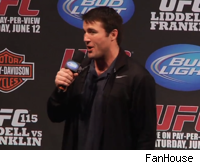 At a recent question-and-answer session in Vancouver, B.C., middleweight contender Chael Sonnen took a few more shots at his UFC 117 opponent, Anderson Silva. Sonnen explained how he believes he single-handedly saved Silva's job and how he plans on taking Silva's belt on Aug. 7.

The Team Quest member also criticized the Nogueira brothers and Silva's manager, Ed Soares, while denying, once again, that he doesn't have a Twitter account, despite the fact that he's already admitted to having one.

Check out the video below.