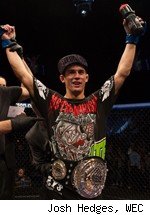 The WEC on Monday officially announced its August card, WEC 50: Cruz vs. Benavidez, which will take place at The Pearl at the Palms Casino Resort in Las Vegas on Aug. 18.

WEC vice president Peter Dropick made the announcement on a media call for Sunday's WEC 49: Varner vs. Shalorus event, and the promotion put out a press release shortly after that.

The main event will feature a bantamweight title fight between champion Dominick Cruz (15-1, 5-1 WEC) and challenger Joseph Benavidez (13-1, 4-1 WEC), a rematch from a fight last August at WEC 42. Cruz won that fight, then won the 135-pound belt by beating Brian Bowles at WEC 47 in March. This will be his first title defense. On the same card in March, Benavidez became the first fighter to submit former champion Miguel Torres, earning the title shot in the process.

The co-main event is notable for former featherweight champion Urijah Faber's debut at bantamweight. Faber (27-4, 8-3 WEC) recently announced his decision to try his hand at 135 pounds. He'll take on Takeya Mizugaki (13-4-2, 2-2 WEC), a stiff test in his first fight after dropping down.

"When Dominick and Joseph fought last August, it was one of those fights that kept you on the edge of your seat," WEC general manager Reed Harris said in the promotion's official release. "Now we get to see the Cruz-Benavidez rematch with even more at stake ..."

"Styles make fights, and both of the last two guys he has fought stood right in front of him," Cruz said. "You can't stand in front of him – you have to use footwork and move. Joseph can't match my footwork and I have a reach advantage on him. That doesn't guarantee me the win, but it allows me to dictate a lot of the fight."

Benavidez, a training partner of Faber at Team Alpha Male in Sacramento, said he wants payback from his only career loss.

"Those are two of the main goals in my career – to win the title and avenge the loss on the same night," Benavidez said. "He's a tough fighter, but I'm a different fighter since I fought him last. I think he had a great night and I had a bad night, and it was still really close. So if I fight like I'm capable of, I have no doubt I will come out with the victory."

Also notable for WEC 50 will be a partnership with the MAGIC Trade Show, a men's fashion apparel and accessories exhibition. Dropick said the event brings 50,000 people to Las Vegas and WEC 50 would be "one of their featured entertainment elements of the show."

Tickets for WEC 50 go on sale Thursday at 1 p.m. Eastern time and are priced from $96-246. The event's main card will be shown live on Versus.