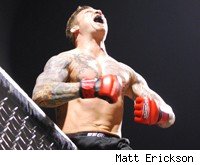 For John Kolosci, it's been an oftentimes strange trip, indeed.

The road hasn't always been smooth and the biggest of his ups have been quickly followed by downs. He hopes maybe this time will be different.

After a unanimous decision loss to fellow Indiana-based fighter Shamar Bailey on Strikeforce: Fedor vs. Rogers in Chicago last November, Kolosci struggled to a split decision win over Bill Hill in January. Things were looking average, at best, for the welterweight.

But he may have changed his fortunes Friday night after submitting nine-time UFC veteran and American Top Team fighter Luigi Fioravanti in just 42 seconds.

Kolosci dropped Fioravanti with a right hand quickly into the main event of the Hoosier Fight Club show, which Kolosci is a partner in and serves as matchmaker for when not fighting on the card. He wasted no time when Fioravanti hit the mat. He pounced, and when Fioravanti turned away to avoid potential ground-and-pound, Kolosci locked in a rear-naked choke. Fioravanti had barely finished tapping before Kolosci was scaling the fence to celebrate the biggest win of his career.

"I didn't know it was gonna happen so quick," Kolosci said after the fight. "I trained really hard to fight three rounds – I figured it was gonna be a three-round fight. But I'll take this. It's absolutely the biggest win of my career. This is great for me." 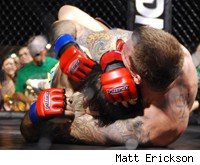 Great for now, but Kolosci is mindful of those past ups and downs, which might just make the win over Fioravanti all the more important to him.

Kolosci first drew attention on the bigger picture MMA scene by landing a spot on Season 6 of the UFC reality series "The Ultimate Fighter." Score that one an "up." But in his second fight in the house, he was submitted by Mac Danzig – "down." Kolosci has always been a confident scrapper, and he proved that to UFC president Dana White when he was the only fighter in the house to jump at the opportunity to face Danzig after Matt Arroyo had to pull out with an injury. Impressing the boss always points the arrow back up. But he again lost to eventual champ Danzig, and again by rear-naked choke. Down. He landed a spot on the TUF 6 Finale show against, ironically, Arroyo. Up. But he lost by armbar. Down.

After the Arroyo loss, a couple of freak injuries left him out of action for 16 months. Down for sure. But then, a leap of faith – just short of his 34th birthday, Kolosci quit his job to focus on training full-time, hoping to get back to that next level, hoping to get up and stay up.

He strung together four straight wins that got the attention of Strikeforce for the fight with Bailey. They were far from glamorous and came at rural Indiana venues like the Kokomo Events Center. And the Wagon Wheel Theatre in Warsaw. And the Lake County Fairgrounds in Crown Point. And a line dancing barn in Lowell – with a dirt floor. All to just keep active, waiting for that phone call.

He got it from Strikeforce, but he was never able to get anything going against Bailey, who trains with UFC veteran Chris Lytle. Bailey gave Kolosci a wrestling match, which Kolosci admitted afterward he wasn't prepared for.

But his win over Fioravanti, he believes, has the potential to turn some heads. Fioravanti's losses have come against names like Chris Leben, Jon Fitch, Diego Sanchez and Anthony Johnson – and he's never lost as quickly as he lost to Kolosci. With the UFC planning a trip to Indianapolis for Sept. 25, Kolosci acknowledges it will be an uphill battle to get a spot on that card – but a loss to Fioravanti could have shut down his hopes for good.

"I wouldn't say it's my last chance," Kolosci said. "I'm 35 – I've probably got plenty of years left in me. I'm in really good shape. I'm still beating up 20-year-olds in the gym, so I feel pretty good about that. But it would be awesome if I could (get on the UFC 119 card). My manager's got to talk to Joe Silva and see if that could happen, but I'm just moving forward. I've just got to win one fight at a time."