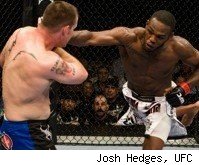 As the UFC exploded in popularity over the last few years, the promotion always prided itself on moving into new markets and breaking arena records by selling 10,000 or 15,000 tickets in a matter of minutes. But the UFC's rapid growth may be slowing down.

The UFC announced Monday that it has moved its August 1 show out of Salt Lake City because it was struggling to sell tickets. The event, headlined by Jon Jones vs. Vladimir Matyushenko, will now take place in San Diego. It's the second time in less than a week that we've had news of a weak market for UFC tickets; in the days before Saturday night's UFC 115 show in Vancouver, scalpers began to sell tickets for less than face value as supply outstripped demand.

Give UFC President Dana White credit: He didn't try to sugar coat the change of venue. In the official statement released by the UFC, White acknowledged that ticket sales were weak.

"Our television ratings in Salt Lake City have always been strong, and when we finally found the opportunity to bring a UFC event there with a great card, I was very surprised and disappointed in ticket sales," White said. "As a result, for the first time in UFC history, I decided to pull the plug and move this August 1st event to the San Diego Sports Arena."

The problems selling tickets don't indicate that the UFC is on the decline, but they do indicate that the UFC simply can't sustain the incredible growth rate that it went through from the time that White and the Fertitta brothers took over through the summer of 2009, culminating in UFC 100. It wouldn't be realistic for any business to expect a continued expansion like the UFC has had.

In a sense, the UFC may be a victim of its own success. There was a time when getting to see a live MMA show felt like a very, very big deal. Now the UFC has been to most of the major markets in America, regional MMA shows are all over the place, and televised MMA feels like the norm, not the exception. In the next week MMA fans can watch four live fight cards from the comfort of their own homes: Strikeforce on Showtime Wednesday, Bellator on Fox Sports Net Thursday, the UFC on Spike Saturday and the WEC on Versus Sunday. MMA is everywhere, and when it comes to your town it doesn't seem like so much of a novelty anymore -- even if the UFC has never come to town before.

None of this is reason for MMA fans to worry about the future of the sport: There are still a lot of reasons to believe that MMA has room to grow, especially if it gets legalized in two of North America's three biggest markets, New York City and Toronto. MMA is here, it's here to stay and it's only going to get bigger. But it's not going to keep getting bigger at the pace of growth it has recently achieved. The inability to sell tickets in Salt Lake City showed that.