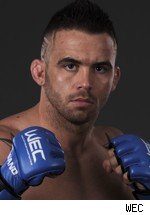 Six days before he faces Kamal Shalorus at WEC 49 on Sunday night, Jamie Varner made a comment that speaks volumes about why it's such a dangerous fight for him.

In a sense, that could be perceived as a slight toward Shalorus, suggesting that no one knows who he is. But what Varner meant, and what I think is undeniably true, is that Shalorus is a lower-profile opponent than Varner is accustomed to fighting, but not any easier an opponent than Varner is accustomed to fighting. That means Varner has a lot more to lose in this fight than Shalorus does.

Varner is fairly well-known among MMA fans. He fought twice in the UFC and is now preparing for his sixth fight in the WEC, and the Shalorus fight is the third straight time he's been in the main event of a Versus-televised card. If you've never heard of Varner, it's because you're not into MMA.

But it's more understandable if you've never heard of Shalorus. He's only been a pro fighter for a couple years, and he only made his WEC debut six months ago. If Varner were to lose to Shalorus, he'd be losing to a guy whose profile in MMA is a lot lower than his own.

And yet, as Varner said, Shalorus is a very dangerous opponent.

"We're very alike in our skills," Varner said. "He's definintely a much more decorated wrestler. I'm a more decorated striker. But when you put us in together anything can happen. Kamal is the type of fighter who can expose one mistake, with big punches, with strong, powerful takedowns, anything can happen. I think this is my toughest fight because the styles are so similar and because I've never fought a wrestler as good as Kamal."

WEC executive Reed Harris said he views the Shalorus-Varner bout as an opportunity for Varner to earn a shot at re-claiming the WEC lightweight belt that he lost in January.

"I think both of these guys are definitely in contention and winning this fight could put them in the top spot," Harris said.

For Varner, thinking about a title fight would be thinking too far ahead.

"Kamal is my No. 1 focus," Varner said. I can't ... overlook a guy like Kamal. I've got to keep my eye on the prize and the prize is beating Kamal, fighting Kamal. what happens next is something I can think about after the fight."