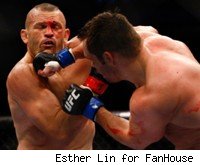 Sunday afternoon I was sitting at my desk, staring at my computer screen in the hopes that words would magically appear on their own, and my dog barked right behind me. It was a bit startling, so I swiveled around expecting to see either a burglar or a rabbit in the house, and that's when I banged my knee against what turned out to be a really solid desk drawer.

I won't lie: it hurt. It hurt a lot. Naturally, I began swearing. A lot. Then I limped around my office for a minute or two, wondering out loud what I'd ever done to my dog or the universe to deserve this.

That's when I remembered Rich Franklin's performance at UFC 115.

It takes a certain kind of person to get his arm broken by a kick, to feel the fractured bones clicking in the middle of a fight, and to arrive at the conclusion that he'd better just go ahead and hit the guy with his other arm. While most people would have called timeout in order to slip into shock and/or cry, Franklin settled for shaking his arm out a little and moving on.


Share
I only point this out now because it occurs to me that this kind of thing has become so common in MMA bouts that we're in danger of forgetting how incredible it is. Fighters are regularly walking right through injuries that would turn most of us into whimpering infants, and they do it while another well-trained professional is trying to take their head off.

Take it from a man who was almost unable to continue writing this article due to a sore knee, that's pretty amazing. Now on to the pitiless post-fight assessments.

Biggest Winner: Martin Kampmann
His win might not have been as flashy as some of the others on the card, but he dominated an opponent who came into the bout as a 3-1 favorite. That's the kind of thing that makes people begin thinking of you as a contender in the welterweight division. One more high profile win, and he may be looking at a title shot.

Biggest Loser: Chuck Liddell
"The Iceman" went out on his shield, and there's a certain type of honor in that. It doesn't mean that anyone wants to see him do it again, though. The way he crumpled to the mat like a man who'd just been picked off by a sniper, there can be little doubt that retirement is the only choice that makes sense now. Let's hope he realizes it too.

Best Ambiguously Meaningful Comeback: Mirko "Cro Cop" Filipovic
If you're an optimist, you might say his third-round submission win is a microcosm of what's about to happen with his career right now. If you're a realist, you might say that he was lucky to make it out of the first round. Regardless, it's a good win for Filipovic, who needed to show a little of the old explosiveness and resiliency to an increasingly skeptical fanbase. Up next, time to try again to make the Rothwell fight happen?

Worst Ultimately Meaningless Judging Error: Tony Weeks
Weeks is the man who was reportedly responsible for Evan Dunham's win over Tyson Griffin being a split decision rather than a unanimous one. Does that matter? Not so much for the fighters, but it sure makes Weeks look clueless. Expect to hear about this incident again the next time Weeks is a part of a questionable decision.

Best Use of a Flippant Attitude in a Post-Fight Interview: Rich Franklin
You've got to love "Ace's" reaction to Joe Rogan's question about whether he would have come out for the second round with his broken forearm. Franklin seemed to regard this as almost laughably ludicrous, as if there was any reason a broken bone in his dominant arm would be a big enough deal to make him stop. Now that's how you leave a lasting impression on the fans.

Best Losing Effort: Rory MacDonald
The UFC announcers treated him like he might be the next coming of Bruce Lee, and that gets a little cloying for viewers, but the Canadian youth showed his toughness against Carlos Condit. He may look like he should be passing notes in study hall and stressing about getting his driver's license, but he fights like a man. I can't wait to see what he's like in five years.

Worst Winning Effort: Ben Rothwell
As much as I like the big fella, he didn't gain many fans with the way he squeaked out a decision over Yvel. He seemed close to being finished in the second round, he looked tired early on, and considering what we know about Yvel's ground game, he had far more trouble than he should have when it came to keeping him down. That leaves a lot for Rothwell to improve upon if he's going to be a contender in the UFC's heavyweight class.

Biggest All-Around Bummer: Mac Danzig vs. Matt Wiman
It's a real shame when a bad move by a referee makes it so that neither fighter can go home happy. Yves Lavigne was talked into stopping this one by Wiman, who seemed to genuinely believe that Danzig was unconscious. That's inexcusable. A ref needs to take a better look at that situation before making a decision that can't be reversed. Now the only solution is to let these two have another go, and get Herb Dean in there to work it.

Best Reason Not to Return to Vancouver: Hat Thieves
As much as we heard about how difficult the local commission was to work with, that's nothing compared to the tyranny of hat thievery. Who are these people who yank off a fighter's baseball cap as he walks to the cage? How can they ever look at that ill-gotten hat without hating themselves? Why aren't their peers in the surrounding seats showering them with scorn and possibly beer? Some people I'll just never understand.

Most Surprising Performance: Evan Dunham
I admit, I gave Dunham very little chance to beat Griffin based primarily on the difference in their experience at this level of competition. But damned if he didn't make me look like a fool by owning this fight from start to finish. We haven't seen Griffin controlled so thoroughly in every aspect of the fight for quite a while. Makes you wonder what else Dunham might be capable of.