Rich Franklin Puts Chuck Liddell on Ice; Underdogs Have Their Day at UFC 115 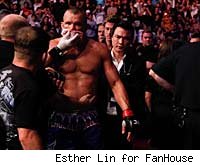 No matter the sport, the great ones always seem to hold on a bit too long. Emmitt Smith closed out his football career as a struggling tailback for the Arizona Cardinals, Babe Ruth hit .181 in his last year for the Boston Braves and Michael Jordan clanged jumpers off the iron for the lowly Washington Wizards.

The last memory of Chuck Liddell in the Octagon is also likely to be a sight that most fans would rather not remember. After a spirited round in which he showed more variety to his offense than he's shown in years, it all came crashing down around the legend. Despite his newfound diet and his hard work, the lasting image of Liddell from UFC 115 was like the few that had come in the fights directly before it: Liddell falling backwards, his head bouncing backwards to the mat as he fell unconscious. This time the punch came from Rich Franklin, putting a close on the event, and likely Liddell's career.

Asked if it was the end for the UFC Hall of Famer, UFC President Dana White answered directly.


More Interviews: Matt Wiman | Claude Patrick | Carlos Condit | Evan Dunham
For the third straight fight, Liddell was finished by an opponent, and at the conclusion of this one, his lip was split and he had a cut just above his left eyebrow. Those, of course, are simple cosmetic issues, unlike the greater problem of the concussions that come with being knocked out. As Franklin and the other winners spoke in the post-fight press conference, Liddell was en route to the hospital for precautionary reasons.

"It's kind of bittersweet," said Franklin, whose left arm was bound and in a sling. "We're friends. I really like Chuck. I went to his locker room afterward to check him out, but the doctors were talking to him. I talked to [Liddell's trainer] John Hackleman for a minute. I don't want to labeled the one who put him out of the sport. I don't like the sound of it."

But the finish will likely be part of Franklin's legacy, along with his middleweight title run at the same time Liddell was the light-heavyweight champion.

Share Interestingly, Liddell showed more versatility to his game that he'd shown in most of his recent fights. After nearly abandoning his kicks and takedowns for the last few years, Liddell made them a big part of his early game plan. In fact, he broke Franklin's left arm with a kick early in the first, and took him down shortly thereafter.

Liddell, who came into the fight in the best physical shape he'd been in for years, seemed on his way to possibly winning the opening round with his varied attack when it all came crashing down. Perhaps sensing he'd hurt Franklin near the end of the first, Liddell waded in deep. Franklin took a half-step aside and caught Liddell with a right to the front of the jaw. The former 205-pound kingpin crashed down to the mat, and Franklin followed him there, adding a right before the referee got there to call a halt to the action.

"I don't have any problems with the stoppage," said White, who was understanding of the referee.

There was only five seconds left in the round, but it may as well have been 50, as Liddell was done either way. It was the fifth loss in six fights for Liddell, who between 1999 and 2006 was one of the most dominant light-heavyweights in the world, winning 18 of 20 fights and successfully defending the UFC title four times.

Rich Franklin punches Chuck Liddell at UFC 115 on June 12, 2010 at the General Motors Place in Vancouver, BC, Canada.

Chuck Liddell charges at Rich Franklin at UFC 115 on June 12, 2010 at the General Motors Place in Vancouver, BC, Canada.

Rich Franklin kicks Chuck Liddell at UFC 115 on June 12, 2010 at the General Motors Place in Vancouver, BC, Canada.

Mirko Cro Cop blocks a kick from Pat Barry at UFC 115 on June 12, 2010 at the General Motors Place in Vancouver, BC, Canada.

"I wasn't going to quit," said Franklin, who improved to 27-5 with one no contest. "I've had broken bones before and continued. But I was wondering what kind of strategy I'd use to win the fight and the second and third round."

Franklin won an $85,000 Knockout of the Night bonus for his performance, which took place before a crowd of 17,000 at GM Place in Vancouver. The event did a $4.2 million gate.

The night turned into a night of underdogs, as several others joined Franklin in toppling favorites.

Among them was legendary Croatian striker Mirko Cro Cop, who overcame a pair of first-round knockdowns to defeat Pat Barry via third-round rear naked choke.

Barry had Cro Cop on the ropes throughout the first but couldn't muster up the killer instinct to finish a man who he'd described as one of his idols in the pre-fight banter. It came back to haunt him as Cro Cop capitalized on his ground advantage in the last two rounds, tiring out Barry over the three-round fight. Cro Cop floored Barry with a left, landed some punches from the top and sunk in a choke, getting the finish with just 30 seconds left in the fight.

Asked if Barry was too forgiving to him as his idol, Cro Cop blanched.

"Not in the first round," he said. "He sat me twice on my ass. He wanted to beat me. He's a pro. He's hungry. Those opponents are most dangerous. They're hungry. They're trying to get to the top and get more money. I'm aware of it."

Cro Cop earned an $85,000 Submission of the Night bonus for his effort.

While Cro Cop's late victory was one of the top momentum shifters of the night, none outdid that of Carlos Condit, who lost the first two rounds of his fight before rallying to TKO surging phenom Rory MacDonald.

MacDonald came into the fight with an unbeaten record, and for the first 10 minutes, it looked like he was going to cruise to another win, outclassing Condit with good striking and takedowns, but he couldn't put Condit away.

In between the second and third, Condit transformed into the "Natural Born Killer" that one time made him a WEC champion. He hurt MacDonald with a right hand and never let up, unleashing a torrent of offense from the top that pulverized MacDonald's face. Desperately needing a finish, Condit went for broke, bloodying and battering MacDonald.

Finally, after a crushing series of ground-and-pound strikes, the referee had seen enough and saved the 20-year-old MacDonald from further damage as Condit completed the fantastic comeback.

"Greg Jackson told me to go to war," Condit said. "I started swinging, Rory was swinging. I caught him with a good shot, and he never really recovered. I was able to implement my top game with elbows and punches."

In another welterweight clash, Martin Kampmann upset the surging Paulo Thiago with a fine all-around performance, outstriking the powerful Thiago with technical punches and kicks, and outworking him on the ground.

Thiago, who came in with wins over Josh Koscheck and Mike Swick, never really had Kampmann in any trouble as he struggled to mount offense while Kampmann found every hole, capturing the fourth win in his last five outings.

In the night's other pay-per-view bout, Ben Rothwell outlasted Gilbert Yvel in a unanimous decision. Rothwell spent most of the three-rounder taking Yvel down and passing into dominant positions though he wasn't able to finish.

In the Spike-aired prelims, Evan Dunham moved to 11-0 with a strong performance in a win over Xtreme Couture training partner Tyson Griffin, while Matt Wiman won a controversial submission victory over Mac Danzig.

Wiman had Danzig in a guillotine, and told ref Yves Lavigne Danzig was unconscious. Lavigne felt Danzig's arm, felt no resistance and called the fight, though Danzig seemed to be fine and protested immediately. Even Wiman realized it was the wrong decision and offered to restart the bout, though the ref stuck to his call.

Danzig didn't blame the ref as he might have, saying, "Any ref has a very hard job. It's not an easy job. I was posting on his knee and I can't let go [to respond to the ref]. I'm trying to stay safe. If I let go of his knee, it would've gotten deeper. I wasn't out and I wasn't about to tap."

White said later that perhaps they would grant the two an immediate rematch.