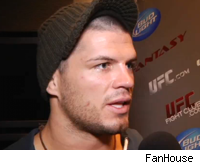 Wiman talked about why he thought the fight was stopped too early, his thought process during the entire sequence and whether he thinks Danzig deserves an immediate rematch.