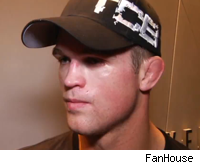 Dunham talked about his dominant performance over his former training partner, how instrumental Griffin was in his improvement as a fighter and whether he won all three rounds, contrary to what two of the three judges thought.