A Five-Round War for UFC 115: The Theater Experience 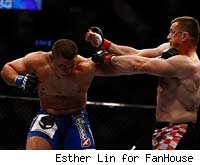 Having experienced the UFC from the cheap seats as a fan, from sports bars, from restaurants with my face covered in wing sauce, from living rooms and from the (relative) comfort of press row, it was time Saturday to check off another box: the UFC theater experience.

UFC 115 marked the promotion's second card partnering with Fathom Events to show pay-per-views in movie theaters. The partnership was announced in February and UFC 111 in March kicked off the experiment. The UFC has said that fans' reaction to watching their Octagon action on the silver screen the first time around was "a great experience and better than they had expected."

I wanted to put that statement to the test, but I knew after a day that had already seen my butt in the same theater's seats for "The A-Team," plus a pre-fight meal of wings and fries, that I might very well be in for a five-round war.

Round 1: After buying my $20 ticket about 10 minutes before the broadcast, I scoped out the theater to see how many people were already there. Sixteen. I immediately returned to explain to the theater manager that I was reviewing the theater experience for a major mixed martial arts website and asked if it would be OK if I brought my laptop in to take notes and write my story. Let's just say there was no touch of gloves to get things started. No laptop for me. Once I settled in to my seat, I was treated to a blank screen throughout the pre-show and throughout the opening video montage. It wasn't until the very end of "Face the Pain" by Stemm that the projectionist finally figured out how to hook the thing up. Fail. Then I realized that I had never been in a movie theater without a trough of popcorn in front of me and a 10-gallon IV of pop coursing through my veins. But I was too aggravated at the theater manager over LaptopGate to hand over more money. It did make me realize, though, that for $20, I was going to watch the fights. But had I done it at any of several places in the area that show them with no cover, my $20 would've been going toward wings, fries, bleu cheese and a tip for my waitress in orange booty-shorts. So out of the gate, I was a little battered in the first round and lost it 10-9.

Round 2: But as the first fight between Carlos Condit and Rory MacDonald got underway, the true splendor of watching on the big screen took over. The high-def picture was exceptional. Watching at most restaurants or sports bars can be hit-or-miss. Most show the fights on many smaller screens around the room and one or two big projection screens. And those projection screens are often poorly lit and they're not in HD, making the color seem faded. Depending on where you're sitting, you may have to crane your neck for three hours, as well. But not at the theater. Great picture. Great sound. Straight on view. And for once, a cushioned seat. From a sight, sound and butt-comfort standpoint, I made a nice little comeback in the second and knotted this thing up 19-19.

Round 3: It wasn't the theater's fault. But the Ben Rothwell-Gilbert Yvel and Martin Kampmann-Paulo Thiago fights really took any chance for the 26 total fans in the theater to be excited and brought them to a grinding halt. It was then I realized aside from a scant few moments when I would hear a couple people respond to a head kick with an "Ohhhhhhhhhhh!" and a knuckle sandwich with an "Oooooooooooh!" that for the most part, the fans I was watching with were either not into it or were so used to being quiet in a movie theater they thought they couldn't cheer. I certainly expected more than 25 people besides myself, as well. Part of the fun of watching fights in big groups with other fans is the atmosphere and the camaraderie with total strangers. But it wasn't happening here. Yeah, I was by myself – and not the only one there solo, either. But from an atmosphere standpoint, this wasn't working. Even in the Mirko Cro Cop-Pat Barry fight, which had great moments to make most fans want to cheer or laugh, the fan response was limited. It was another lost round, putting me down 29-28 after three.

Round 4: I'll tell ya what, though – watching a UFC card in public without any chance of having smoke in my face like at a bar or restaurant (Indiana isn't entirely smoke-free yet) was a nice bonus I hadn't thought of. And while drinking beer and watching fights go hand in hand, there was also no shot of having to listen to some over-served, drunken idiot yelling at the screen while his not-as-drunk friends tell him to sit down. I don't need a drink or 12 to enjoy fights. So this was only the hardest of the hard-core fans, and that was nice. I was even on the scorecards going to the last, 38-38.

Round 5: Rich Franklin shutting things down with Chuck Liddell much quicker than I expected gave me some time to reflect as they showed the Jesse Lennox-Mike Pyle fight from the prelims. The experience of seeing a UFC event larger-than-life on a quality screen with quality sound is pretty hard to top without being there in person. The atmosphere could've been better –but maybe that's just specific to my theater. I did see several groups of three or more people together, which made me wonder why they were paying a combined $60-80 when they could've been putting that money toward food, drinks or the pay-per-view from the comfort of their own couch. The $20 ticket price I paid isn't outlandish, but it certainly would limit larger groups from flocking to theaters en masse to watch the fights. After three people, you've already lost money compared to ordering the pay-per-view and you have nothing else to show for it other than watching it on a bigger screen. But at the end of the day, the theater is a great little insurance policy if you show up somewhere else and can't get a seat or your friends all bailed and you just want to see the fights without the pay-per-view expense. If the tickets were just a bit cheaper, I could get almost permanently on board – and my stomach would thank me, too, because it would mean I wasn't eating wings as often. It's a very close final round.

Decision: There are certainly pros and cons to the UFC theater experience, and whether or not it works for most people for repeat viewing is probably circumstantial. I know it will be for me. I could suggest to anyone that they try it at least once for a more unique way to see a fight card. But the judges are taking the easy way out on this one – it's a 48-48 draw.