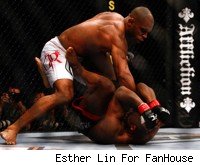 This is the UFC 115 live blog for the four preliminary bouts on tonight's UFC 115 card from the General Motors Place in Vancouver, BC, Canada.

Round 1: Miranda doesn't allow Loiseau to get comfortable for a second, as he takes him down with a belly-to-back right away. Miranda is smothering "The Crow" on the ground. Loiseau is holding Miranda's wrists, which is keeping Miranda's submissions at bay. Loiseau finally gets up, and we notice his left eye is swollen. Loud "Let's Go Loiseau" chant at the GM Place. Miranda takes Loiseau down again. Loiseau escapes again, but Miranda doesn't let him go far, as he keeps Loiseau pressed up against the cage.

MMA Fighting scores the round 10-9 Miranda.

Round 2: Loiseau lands two left head kicks in a row. The crowd is excited. Loiseau then connects on an overhand right. Miranda has enough of this striking business, so he takes Loiseau down again. Miranda lands shots to Loiseau's head. Big cut has opened on Loiseau's head. Miranda has side control. Loiseau gives up his back. He's turtled up. This feels like the Ed Herman fight all over again for Loiseau. Miranda flattens Loiseau out. Loiseau is trying to defend the rear-naked choke. Miranda is landing repeated elbows and strikes to the side of Loiseau's head before the ref stops the fight.

Round 1: Wilks dominates the round with a kickboxing and ground work.

Round 2: Sobotta lands an upper cut early. Sobotta is keeping the fight close in the clinch. Wilks seems a little frustrated. Sobotta trying for a single-leg. Finally, Sobotta pulls guard. Some nice back-and-forth jiu-jitsu going on, with both men trying for submissions on the ground. Nothing doing, though, so the refs stands them up. More clinch work as the round ends.

Round 3: Midway through the round, Sobotta takes Wilks' back. He is trying for a rear-naked choke. Wilks keeps his chin down, not allowing Sobotta to get his left hand under his chin. Wilks reverses and lands in Sobotta's closed guard. Sobotta is doing a good job of not allowing Wilks to posture up, but Wilks does a nice job of landing shots to the body as the round ends.

Round 1: Patrick, a Canadian hailing from Ontario, is clearly the crowd favorite in this fight. It's a big one for him because it's his UFC debut. After some time in the clinch, Patrick gets Funch down. As Patrick is in Funch's closed guard, the referee stops the fight for a moment. The replay is shown, and I don't understand why he stopped the action. Anyhow, the fight resumes, and Patrick connects on a couple rights. Patrick is doing nice work on the ground. He ends the round with what appears to be a semi-tight guillotine choke. Funch survives.

MMA Fighting scores the round 10-9 Patrick.

Round 2: Funch tries for a single-leg early on, but Patrick does a good job defending it. While they are in the clinch, Patrick grabs a hold of Funch's neck, holds on tight to a guillotine choke, which leads to the tap out. Great debut.

Round 1: Lennox connects with an overhand right early. He is controlling the center of the cage early one. Lennox connects to the body as Pyle backs up quickly. Pyle shoots for a takedown, but Lennox backs up while driving his head into the cage. He escapes successfully. Lennox barely connects on a right leg head kick. Lennox is looking to go to the body a lot, which is nice. This crowd is very hungry early. They want to see a knockout, and they want to see it now. Such is usually the case during the first fight on a first-ever UFC card in a new market. Back to the action, Pyle connects with a straight jab to Lennox's face. Pyle connects on a combo, but leaves himself open to a big overhand right by Lennox. Pyle, though, responds with two rights of his own, which rock Lennox. Pyle takes Lennox down, and is landing shots on the ground as the the round ends.

MMA Fighting scores the round 10-9 Pyle.

Round 2: Pyle takes Lennox one minute into the round. He looks for an armbar, but Lennox does a good job of keeping his hands together. Pyle is in Lennox's guard, but unable to posture up. Lennox's reverses, and is now in Pyle's closed guard. Not much action going on. Lennox could steal the round in the final minute. Pyle gives up his back. Lennox is trying for an armbar or kimura, but Pyle is keeping his hands locked.

MMA Fighting scores the round 10-9 Pyle.

Round 3: Both Pyle and Lennox are trading punches early one. Pretty solid boxing skills shown by both fighters. With a minute left, Lennox lands a nice superman punch. He counters with a left, which seems to have rocked Pyle. Pyle moves to the ground with Lennox in his guard, but as Lennox is trying to land shots, Pyle locks him up in a triangle choke. The choke looks tight, and Pyle makes matters worse by landing elbows to Lennox's head. Lennox appears to be out cold, hasn't tapped, and Pyle is telling the ref he is out. The ref then realizes Lennoz is indeed out.

Rich Franklin punches Chuck Liddell at UFC 115 on June 12, 2010 at the General Motors Place in Vancouver, BC, Canada.

Chuck Liddell charges at Rich Franklin at UFC 115 on June 12, 2010 at the General Motors Place in Vancouver, BC, Canada.

Rich Franklin kicks Chuck Liddell at UFC 115 on June 12, 2010 at the General Motors Place in Vancouver, BC, Canada.

Mirko Cro Cop blocks a kick from Pat Barry at UFC 115 on June 12, 2010 at the General Motors Place in Vancouver, BC, Canada.