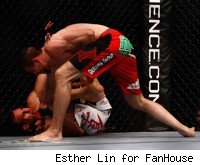 This is the UFC 115 live blog for Carlos Condit vs. Rory MacDonald, a welterweight bout on tonight's pay-per-view from the General Motors Place in Vancouver, BC, Canada.

Round 1: MacDonald takes Condit down early but lets him back up. MacDonald takes him down again with an inside leg trip, and into Condit's guard. After a stalemate on the ground, MacDonald lets him back up. A Condit left hook stunned MacDonald briefly, but the 20-year-old fires right back and wobbles Condit, then takes him down. Nice combo from Condit with a straight right and leg kick that both landed. MacDonald later answered with one of his own. MacDonald landed yet another takedown to close the round. MMA Fighting scores the round for MacDonald, 10-9.

Round 2: Condit tried a throw but MacDonald ended up on top in half-guard. MacDonald backed away and let him up. MacDonald's left hook is on the money. The Vancouver fans chant "Rory! Rory!" Condit took MacDonald down but the kid swept immediately into top position. Back to standinng, Condit presses the action with punch combinations but MacDonald doesn't back away. MacDonald stuffs a takedown try with about a minute left. MacDonald has a small cut on his nose. Condit goes for a flying front kick at the end of the round but MacDonald throws one of his own at the same time and knocks Condit down. MMA Fighting scores the round for MacDonald, 10-9.

Round 3: MacDonald with a headkick early. He swarms with strikes. Condit answers with a power right hand. MacDonald goes for the takedown but Condit ends up on top. Condit lands a left elbow from the top. Condit is fighting like a man who is behind on the scorecards and needs a finish. He mounts briefly, but MacDonald gets it back to half-guard. Condit with another power right from the top. MacDonald gets back to his feet with 2:40 left. MacDonald tries a takedown and Condit ends up on top again. Condit starts hammering with elbows from the top. MacDonald's eye is swelling quickly. Condit keeps his position and lands more elbows. What a frantic finish for Condit. This is how you fight from behind. MacDonald is trying to survive as there are 45 seconds left. Condit keeps up the flurry and with less than 10 seconds left the ref steps in and calls a halt to the action.