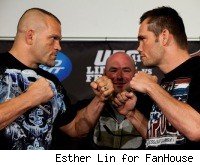 Stylistically, Chuck Liddell's night got easier when Tito Ortiz was forced to withdraw from their fight and he was replaced by Rich Franklin. Competitively though, it likely got more difficult.

After facing and beating Ortiz twice, Liddell has a very good idea of nearly everything Ortiz brings to the table. He understands his strategy, setups and execution. He's experienced his spacing, striking and shooting. He's seen it all in 3-D and conquered it. That's not to say that the third time around would be automatic, just that the variables that go with unfamiliarity are non-existent.

Franklin, too is a familiar opponent, but in a different way. The former UFC middleweight champion has been around the MMA game long enough that he has few secrets in his arsenal, but Liddell has yet to experience them in person. He doesn't know how quick his hands are, how strong he is, or what kind of power he packs with his striking. And that's what makes the main event of UFC 115 compelling.

Of course this information goes both ways; neither has Franklin experienced Liddell, but it is more important for Liddell for one major reason: ring rust. Over and over, we've seen fighters coming off long layoffs struggle with distance and timing. Liddell may be in fantastic shape (as he showed MMA Fighting's Ariel Helwani), but when he steps into the cage on Saturday, it will be 14 months between bouts, an eternity in the fighting business.

While Liddell (21-7) told MMA Fighting last week that he was discounting the possibility of ring rust, more and more evidence seems to indicate that it is a real phenomenon, particularly among strikers.


More Coverage: UFC 115 Results | UFC 115 Pictures | Latest UFC 115 News
But there is another reason the information is important, and it is due to Liddell's style. "The Iceman" has always been at his best as a counter-striker, keying off his opponents' offense to start his own. But if his timing is off, he could find himself getting hit and whiffing as Franklin (26-5, 1 no contest) dances away. Franklin could make the process even more difficult by utilizing lots of leg kicks, which did Liddell in at the hands (and feet) of Keith Jardine.

Of course, there is one way in which Franklin is an easier matchup to prepare for than Tito Ortiz, and that is due to the fact that Liddell will not have to worry nearly as much about the constant threat of takedowns, as Franklin -- like Liddell -- has made his living as a striker.

While Ortiz is always looking to get inside, and sometimes shoots from way outside in an effort to get the match to the ground, Franklin has historically only gone for opportunistic takedowns when he suddenly found himself in position for one.

When it comes to diversity of striking, Franklin gets a big edge. He's much more likely to mix it up with punches, kicks and clinchwork while Liddell in recent years became content with loading up the right hand for the knockout shot. In fact, according to Compustrike, Liddell has averaged just four thrown kicks over his last 13 fights (Franklin averages 21 thrown kicks per fight). That has made him quite predictable, opening the door for guys like Quinton "Rampage" Jackson, Rashad Evans and Mauricio "Shogun" Rua to figure him out.

Liddell has tried to correct that, or at least address it by working with former Olympic boxing gold medalist Howard Davis. While Liddell and his trainer John Hackleman are known for power-punching, Davis has more of a stick-and-move mentality, and the hope is that a hybrid of the two styles will prove a better combination for Liddell at this stage of his career. But given Liddell's propensity to revert to the right hand, we almost have to assume that in the heat of battle, that same instinct will kick in most of the time.

Liddell, though, might surprise us with a few wrinkles in his plan. Though he's lost his four of his last five fights, he surprised Rua and Wanderlei Silva in two of his last three with takedowns, a part of his game he abandoned through much of his run as the light-heavyweight champ a few years prior. (Again, Compustrike numbers bear this out, with Liddell trying only six takedown attempts over his last 13 fights.) Franklin has good takedown defense, but it's never a bad idea to give your opponent something else to think about.

Both men are underrated in their ground games. Liddell simply doesn't spend much time there upon being taken down, as he's almost robotic in his ability to get back to his feet in seconds. Franklin is very good on the ground but like Liddell, tries to stay on his feet as often as possible, as evidenced by the fact that he doesn't have a submission win since 2004.

Liddell should be commended for whipping himself into phenomenal shape. Many great athletes nearing the end of their careers struggle to find the motivation to do so, even knowing what is at stake. In doing so, Liddell knows that there are no further excuses. If he loses, it's not due to taking the fight too lightly; it's simply because he was bested.

This is how I see this fight developing: Franklin will be the aggressor early and he'll be able to frustrate Liddell by dancing into range, landing and circling free untouched as Liddell works to figure out the timing and distance issues. If it was 2005, Liddell's power and fearlessness might be enough, but in 2010, Franklin's accuracy and technique should be favored. The fight will get more competitive as it goes on and Liddell finds his rhythm, but as long as Franklin avoids the game-changing right hand, he will have built a big enough cushion to earn the decision in the matchup of former champs.