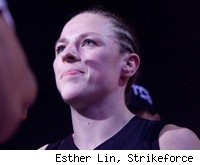 The two top 10 female fighters will meet in support of the Showtime event happening July 23 at the Comcast Arena in Everett, Wash. Undefeated heavyweight Shane Del Rosario (9-0) will main event against Lolohea Mahe (4-1-1).

Kaufman (11-0), who was crowned the champion in February after defeating Takayo Hashi, was the one to actually campaign for the fight. On the night of Modafferi's split decision win last month over the highly regarded Tara LaRosa, Kaufman started a thread on the MixedMartialArts.com forum with the message, "Wanna fight?"

Modafferi (15-5) told MMAFighting.com soon after that she was all for challenging Kaufman.

"This is so exciting!" Modafferi wrote in an email. "I hoped to relax and soak in my victory over Tara, but I'm already getting itchy to go back to the gym. Full speed ahead! To rise off the ground, you gotta believe you can fly."

Modafferi made her Strikeforce debut last November in a loss to Marloes Coenen on the undercard of Fedor vs. Rogers. The English teacher based in Japan has since recorded back-to-back wins.

In MMAFighting.com's Top 10 Women's Pound-for-Pound rankings, Kaufmann and Modafferi hold the No. 3 and 4 spots, respectively. Strikeforce 145-pound champion Cris Cyborg is No. 1 and Bellator's Megumi Fuji is No. 2.