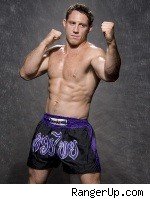 In the first installment of Writer vs. Fighter, Cain Velasquez narrowly defeated me after we predicted almost exactly the same results for UFC 114. In an effort to distract attention from my loss, allow me to point out that we were both spot on when it came to the main event, even if we also both missed a few on the undercard (yeah, like you picked Mike Russow to knock out Todd Duffee, smart guy).

For UFC 115 this weekend, I challenged Army Ranger and Strikeforce middleweight Tim Kennedy to square off against me in one of the only MMA-related activities I actually stand somewhat of a chance at beating him in. And even though Tim has a real fight to worry about against Trevor Prangley at next Wednesday's Strikeforce event in Los Angeles, he was gracious enough to accept.

Now I must put his kindness out of my mind and focus on destroying him. As they say in both prison and reality TV, I didn't come here to make friends.

Chuck Liddell vs. Rich Franklin
Tim's pick: Liddell via KO. While he admits his associations make him not terribly objective about this fight, Tim says, "He's more dangerous of a striker, and there's no way Rich will be able to take him down and hold him there."
My pick: Franklin via decision. I think "Ace" would be a fool to get into a shootout with the more powerful Liddell, but if he stays on the move he can pick away at him for three rounds.

Mirko "Cro Cop" Filipovic vs. Pat Barry
Tim's pick: Cro Cop via decision. Tim identifies himself as "a big Pat Barry fan," but says Filipovic's experience will make a big difference.
My pick: Barry via KO. Cro Cop hasn't looked really impressive against a quality opponent since 2006. Barry wants this more, and his superior speed will help him get it.

Paulo Thiago vs. Martin Kampmann
Tim's pick: Thiago via decision. "That one's hard to call," Tim says after an excruciatingly long pause. No further explanation is offered.
My pick: Thiago. I don't see any area where Kampmann has a significant advantage, and we know that Thiago can make some tough guys go wobbly when he touches their chins.

Carlos Condit vs. Rory MacDonald
Tim's pick: Condit via submission. Tim did not seem as though he needed to put a lot of thought into this one.
My pick: MacDonald via decision. Honestly, Condit hasn't looked all that impressive since transitioning to the UFC. I think the youngster MacDonald might surprise some people here.

Tyson Griffin vs. Evan Dunham
Tim's pick: Griffin via KO. Two words: experience and power.
My pick: Griffin. Dunham's an excellent fighter, but Griffin is on a roll. Woe be to whoever gets in his path, teammate or not.

Mac Danzig vs. Matt Wiman
Tim's pick: Danzig via TKO. While Tim debated the method (either TKO or decision), he didn't struggle much with who the winner will be.
My pick: Danzig via decision. He knows he's still on somewhat thin ice in the UFC, so he'll play it safe and get the victory.

And so out of seven fights, Tim and I differ on three of them, including the main event. If only I could go back in time to 2005 and tell that version of myself that one day I'd be pinning all my hopes on Cro Cop getting knocked out by a kickboxer and Rich Franklin beating Chuck Liddell, you can bet that 2005 me would be pretty freaked out. Mostly because of the time travel stuff, but the MMA picks might seem weird too.