As Rampage Jackson's 'A-Team' Hits Theaters, a Look at MMA Stars on Film 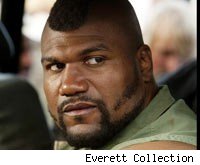 And while reviews of the film so far have been hovering around that "average at best" range, the early returns on Jackson's performance have been mostly positive.

Considering the attention given to the film in the MMA community thanks to Jackson delaying his planned fight with Rashad Evans in Memphis to be a movie star instead, there's no doubt there are MMA fans who will see it just for Jackson. Expect something short on character and plot development and high on, well, stuff just getting blown up – a summer popcorn flick.

But make no mistake – Jackson as B.A. Baracus is the biggest role yet for a fighter on the big screen. He's far from alone in taking on movie roles, but there's a reason you haven't seen or heard of the vast majority of your favorite cage fighters crossing over into acting.

Not surprisingly, UFC president Dana White has an opinion on Jackson's breakthrough role – after the controversy about him taking it in the first place had died down.

"I'm actually proud of the fact that Rampage made such a good movie," White said after UFC 114 last month. "I've been hearing from everybody that he did a great job in it, and there's no doubt it's gonna be a big hit this summer."

But he also has an opinion on most of other films his top talent has appeared in.

"It just goes to show how popular the sport's getting, and there are a lot of (moviemakers) who are interested in the sport," White said. "The problem is, it's all the bottom feeders that are coming out. Rampage landed probably the biggest role – and (Randy) Couture has got a big role this summer in 'The Expendables.' But most of the movies are (crap) you wouldn't watch on DVD. Know what I mean? A lot this stuff, it would be lucky if it makes it to DVD. I won't even watch 'em – all you've gotta do is look at the cover and go, 'Hell no – I'm not watching this!'"

With Jackson raising the bar for fighter wannabe actors everywhere, let's take a look at the best – and the worst – of fighters in films.

The Best
Cyborg Soldier: A straight-to-DVD gem, Rich Franklin is a soldier created in a lab. He hooks up with Tiffani Thiessen of "Saved By the Bell" and "90210" fame and together they elude Franklin's creator. It's one giant homage to about 50 other movies just like it. But stuff blows up. And did I mention Kelly Kapowski/Valerie Malone?!? I've never stopped loving her and will watch anything she's in – even this. "Cyborg Soldier" is unique in that Franklin didn't take the easy road by playing a fighter. He plays a cyborg, which involves some true acting chops. Cyborgs are awesome.
Watch it for: Rich Franklin, Tiffani Thiessen (not a fighter, but she'll still knock you on your butt in other ways)
View the trailer here

Circle of Pain: This one isn't scheduled to hit DVD shelves until Aug. 15, but it's already hard to contain myself at the potential for mind-blowing awesomeness. An elite cagefighter has to retire at the top of his game and after five years, he's lured back in thanks to – shockingly – an evil and crooked promoter. Miguel Torres told me last week the movie will be about 10 kinds of fantastic and that he went from having no lines as "Kwan" to scoring a line – in his debut. Must be the power of the mullet. Another indicator of sweetness? It stars Dean Cain of TV's "Lois and Clark" fame. Cain is scheduled to appear in 11 movies in 2010 alone. This is one of them. He's obviously very selective in the projects he signs on for, so you know this will be quality.
Watch it for: Heath Herring, Kimbo Slice, Roger Huerta, Frank Mir, Miguel Torres
View the trailer here (Warning: strong language)

Redbelt: This had so much potential. It was written and directed by the famed David Mamet, who wrote the screenplay for the 1981 adaptation of "The Postman Always Rings Twice," "The Untouchables," the screenplay for "Glengarry Glenn Ross," "Hoffa" ... hopes were high. And the cast was solid with Chiwetel Ejiofor, Tim Allen, Joe Mantaegna, Ed O'Neill, Jennifer Grey – easily the most star-studded MMA-type movie. Critics panned it universally, probably because the plot is the same as all the others – hero fighter doesn't want to fight, but bad guys force his hand. And while it makes this particular "best" list, it was expected, thanks to Mamet, to be a critically acclaimed film on a much larger scale.
Watch it for: Randy Couture, Ray "Boom Boom" Mancini, Frank Trigg
View the trailer here


The Worst
Ultimate Champion: Sometimes we stumble across movies that make us say, "Wow. This is so bad, I think it might actually be good." Like "Showgirls." But "Ultimate Champion" is probably not going to be one of them. Shot two years ago and starring Stephan Bonnar as Troy Jennings, it's scheduled to drop on DVD on July 1. That's a Thursday. It doesn't even get standard Tuesday release status. Putting it on the worst list is based on the trailer alone, which looks like something your buddies shot for a community college film class. It must be seen to be believed. I hope I'm wrong when I rush out to get it the day it comes out and it replaces "Showgirls" in my Every Third Monday rotation. But please – do yourself a favor and watch the trailer. It will change your life.
Watch it for: Stephan Bonnar, Sean Sherk, Sokoudjou, Gilbert Melendez, Travis Lutter, Jason Lambert, Oleg Taktarov
View the trailer here

Death Warrior: I'm still a little scarred from this one. To save his wife from an evil promoter who has kidnapped her, a warrior – a DEATH warrior – has to take on the deadliest fighters in the world ... to the DEATH. Duh. It stars kickboxing legend Hector Echavarria, who always seems to turn up in these things as an actor, writer or director, or a combination of them all. And they always redefine the definition of the letter "B." Remember, with "B-Movies," the "B" stands for "BAD." To borrow from Run-DMC, not bad meaning bad, but bad meaning good.
Watch it for: Keith Jardine, Rashad Evans, Georges St-Pierre, Rampage Jackson, Mauro Ranallo
View the trailer here

Never Surrender: I'm actually not certain if this is its own movie, or if it's the same as "Death Warrior." It's another Echavarria production, featuring a fighter who has to do battle in an illegal underground promotion. And of course, in order to survive, he has to kill ... and never surrender. This movie would have been infinitely better if they would have licensed the Corey Hart song of the same name and did an '80s style montage showing just how our hero will, ya know, never surrender. 'Cause no one can take away your right to fight and never surrender. Corey taught us that. The great thing about this film is, when you're watching it, if you've eaten too many Pringles and are starting to hallucinate, you won't be certain at some points that you didn't actually click over to some late-night Cinemax entertainment, if ya get my drift. So, bonus. Watch the trailer. You'll see.
Watch it for: Anderson Silva, Georges St-Pierre, BJ Penn, Heath Herring, Rampage Jackson
View the trailer here

Your Favorite Fighters on Film

Randy Couture
The Scorpion King: Rise of a Warrior, Redbelt, Cradle 2 the Grave, Big Stan, Invincible, The Expendables, Today You Die, No Rules