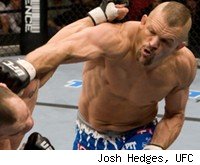 More than a year after he lost a fight that UFC fans were told would be his last, Chuck Liddell is back on Saturday night against Rich Franklin, who stepped in on short notice to fill Tito Ortiz's place both as a coach on The Ultimate Fighter and in the main event at UFC 115 in the season-ending fight between the coaches.

So does Liddell still have anything left? Or is the most popular fighter in the history of the UFC about to lose again? We weigh in on that and more in our full preview and predictions below.

More Coverage: UFC 115 Results | UFC 115 Pictures | Latest UFC 115 News
Predictions on the five pay-per-view fights:
Chuck Liddell vs. Rich Franklin
At first glance, Liddell and Franklin might appear to be at fairly similar places in their careers: Both are former champions whose best days are behind them and who are coming off ugly first-round knockout losses. But the 40-year-old Liddell is five years older than Franklin, and I think he's a lot further past his prime than Franklin is. Liddell is one of the sport's all-time great competitors, and it would be great to think he might be back on top some day, but I just don't see it happening.
Pick: Franklin

Mirko Cro Cop vs. Pat Barry
Cro Cop is a little like Liddell, a fan favorite knockout artist who's way past his prime. The 30-year-old Barry has just six pro MMA fights on his record, although he had a six-year career as a pro kickboxer before he got into MMA. Barry has gushed about how he considers Cro Cop his idol, and I think he's going to beat his idol, simultaneously earning his biggest victory and also demonstrating once and for all Cro Cop is done as an elite heavyweight.
Pick: Barry

Paulo Thiago vs. Martin Kampmann
You wouldn't know it from the lack of media attention devoted to him, but Thiago is the best fighter on this card. At 13-1, Thiago is probably only a couple of wins away from getting a welterweight title fight, and I expect him to get one of those wins against Kampmann, who's a well-rounded and exciting fighter but not quite on the level of Thiago.
Pick: Thiago

Ben Rothwell vs. Gilbert Yvel
Rothwell is fighting for the first time since Cain Velasquez brutalized him in October, and Yvel is fighting for the first time since Junior dos Santos brutalized him in January. These two heavyweights are on the main card not because they're great fighters but because they're almost certain to produce a fight that ends in a knockout. I think it'll be Yvel who lands the punch that ends the fight.
Pick: Yvel

Carlos Condit vs. Rory MacDonald
MacDonald is one of the most exciting young prospects in all of MMA, a 20-year old Canadian who's won all 10 of his pro fights, with six submissions and four knockouts. I give the UFC a lot of credit for its matchmaking in putting him in the Octagon against Condit, who's a step up -- but not too big a step up -- in competition for him. I believe Condit, the former WEC welterweight champion who's 24-5 in his career, is going to stay out of trouble against MacDonald and win a decision.
Pick: Condit