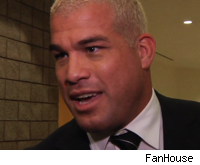 Breaking his silence about his neck injury, withdrawing from his fight with Chuck Liddell and being replaced on The Ultimate Fighter, Tito Ortiz said he plans to be back in the cage around October or November, and hopes to return against Liddell.

Speaking on Spike's Inside the Ultimate Fighter podcast, Ortiz said he will actually be rooting for Liddell in his UFC 115 bout this weekend against Rich Franklin, but said win or lose, Liddell should have to face him later this year.

"I think we should still fight, just because of the s--- he's been saying. Saying that I'm afraid of him and I'm a p----, this and that. Go f--- yourself man. Are you kidding me? Has he ever defended his world title longer than me? No. Has any light-heavyweight ever defended the world title longer than me? No. I'm only 35 years old. I'll be back in the cage again, and I'll be dominating."

Share In an interview with MMA Fighting last week, Liddell accused Ortiz of signing up for TUF only as a promotional outlet for his Punishment Athletics brand, and said he believed Ortiz never planned on going through with the fight.

Asked to respond to Liddell's accusations, Ortiz said that he originally agreed to do the show even before he fought Forrest Griffin at UFC 106, and even after suffering numbness and other physical pain from a neck injury following the Griffin fight, he still thought he would be able to complete the season and fight Liddell until two doctors -- including a UFC-approved doctor -- told him otherwise.

"There was a disc and two bone spurs pressing on my spinal cord," he said. "If anyone's had spinal cord problems or disc injuries in their neck, they'd understand what I went through."

Despite it being the second major surgery in 18 months (he also underwent back surgery in Oct. 2008), Ortiz said he never harbored any thoughts of retirement, and believes that with physical issues in the rearview mirror, he can still be a factor in the light-heavyweight division despite not winning a UFC match since 2006. Citing his close fights with former champs Griffin and Rashad Evans, Ortiz said that at 100 percent, he believes he is capable of beating anyone in his weight class.

"Me with my mind focused, being in the gym everyday and being the strong, ferocious, ground-and-pound artist I am, when I get back in the cage, you'll see Tito Ortiz is back," he said.

Ortiz, who also spoke about his time coaching the TUF contestants and who the best long-term prospects were, left one major surprise.

"Hopefully Chuck will get a knockout in the first round," he said. "Yes, I am rooting for Chuck to win."