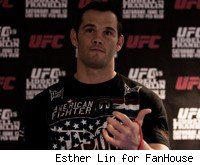 When the UFC first made tickets available for UFC 115, which takes place Saturday night, they sold out in a record-setting 30 minutes, and the promotion and local MMA fans celebrated what looked like a strong sign that Vancouver was wild about its first UFC show.

But the market for tickets to UFC 115 might not be quite as strong as it first appeared.

The Vancouver Sun reports that scalpers acted fast to buy UFC 115 tickets and are now actually offering tickets on the re-sale market for less than they paid in the first place. The paper reports, for instance, that when tickets first went on sale they ranged in price from $75 to $601, but now tickets are available at StubHub for as low as $69, and floor seats are going for $475.

And prices may go even lower.

"Tickets are perishable items, so given that there is quite a bit of availability right now, we should expect to see fluctuations in pricing between now and the event day itself," Joellen Ferrer, manager of public relations and corporate communications for StubHub, was quoted as saying. "If supply outpaces demand, we will certainly see prices go down even further."

That doesn't mean there won't be a big, boisterous crowd on Saturday night at GM Place. But it does mean that some scalpers are regretting helping the UFC set a record for ticket sales.