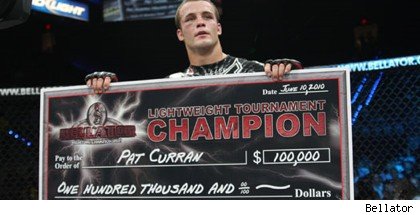 With the win, Curran earns the opportunity to face Bellator champion Eddie Alvarez later this year.

Imada seemed to control the pace of the first two rounds, putting Curran against the cage for much of the time and scoring with kicks to the legs and body, as well as the occasional takedown. Even in the striking exchanges, it seemed like Imada was getting off quicker and landing more regularly.

The momentum shifted to Curran (12-3) in the third as he figured out the range and bloodied Imada under the right eye.

"That was one of my toughest fights I ever had," Curran said. "He's a tough guy, solid chin. It was a close fight. I hope everyone enjoyed it."

A dejected Imada walked off shaking his head after the decision was read.

Curran, who upset Roger Huerta last month in another close match to advance to the semis, now hopes to continue to his luck against Alvarez, who has won 10 of his last 11.

"It was a tough fight, it could've gone either way," Alvarez said. "That's what happens when you leave it to the judges. I'm impressed and looking forward to fighting him."

Fighting in North America. for the first time since 2007, the unbeaten Megumi Fujii -- widely concerned one of the top pound-for-pound female fighters in the world -- earned her first-ever TKO victory, finishing Sarah Schneider in the third round.

Fujii, a jiu-jitsu and judo black belt, earned most of her success and reputation as a submission artist, earning 16 of her 19 prior wins by way of tapout. She was able to take Schneider down several times and bloody her nose with strikes, but Schneider was able to stifle most of her offense by tying her up and forcing restarts.

In the third though, Fujii had worn her down, took her down and soon moved to full mount. From there she rained down strikes until the referee called a halt to the action at 1:58 of the round.

Fujii will return to Bellator later this summer as an entrant in the promotion's first women's division tournament. She will be considered the favorite when the 115-pound tourney begins on Aug. 12.

"I will show my skill and I hope to be the champion," she said.

Banks carried the first round as Hayes struggled to bridge the gap of distance against the taller man, but Hayes solved the problem in the second by committing to his strikes, and as Banks tired, the fight swung more and more in Hayes' direction.

By the third, Banks took advantage of breaks in the action to put his hands on his hips and take a deep breath, but Hayes never gave him a chance to truly rest, working the clinch against the fence and then scoring a takedown in the final minute to cinch the win.