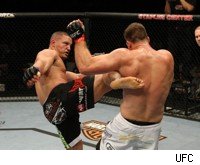 With the local media focused on insurance issues that threatened to derail UFC 115 from coming to Vancouver, the event's pre-fight press conference became largely an exercise in education about the process of moving to a new market.

But when the four fighters attending the event had a chance to talk, it was Pat Barry and Mirko Cro Cop who stole the spotlight from main-event headliners Rich Franklin and Chuck Liddell.

Barry, making his first appearance in a co-main event, voiced his excitement and nervousness at the opportunity while gushing over the prospect of facing the legendary Croatian knockout artist.

"As to what this means to me, I'm just a kid up here," he said. "I don't know whether I have to use the bathroom or throw up sitting on the stage here right now. I've always been the guy behind the TV screen watching this and the fact that I'm even up here right now is still unbelievable. I've shaken my head a few times to see if I'm awake. This means everything I've been doing, all the sacrifices I made, all the childhood dreams of being a ninja every Halloween, it's really coming true."

Share Barry detailed some of his struggles to get to this level of MMA, down to his last dollars and figuratively fighting with his back against the wall until a big win over Antoni Hardonk brought him a large financial bonus and a golden opportunity against Cro Cop, one of his idols. Barry, who voiced a goal of leaving the weekend with a Cro Cop autograph, said that he hadn't yet received it although the fighters had a chance to meet yesterday.

"I'm still trying to figure out when's the appropriate time to ask for it," he said. "Before or after?"

He turned towards Cro Cop, sitting opposite him on the stage: "It's still something I want and whenever you're OK with giving it to me, I don't mind."

Cro Cop later said he would indeed give Barry the autograph. Before doing that though, he got off a great line of his own.

After Barry said that if he beat Cro Cop on Saturday, he was going to "go home and stare out the window for two years," Cro Cop reminded him that the same might be true if Barry lost.

"If I get lucky and land the high kick, he might stare at the window for two years, too," he said. "With a nurse."

Earlier, Cro Cop spoke of his respect for Barry, who is 2-1 since entering the UFC, but has flashed impressive standup in all of his fights.

"He's an amazing guy, a very decent guy," Cro Cop said. "I like the guy, but I'll treat him like any opponent."

A pair of noteworthy developments came out of the press conference. For one, Cro Cop appeared with a large scratch across his forehead that had not been there the day before. When asked where it came from, he played it for laughs.

"It's a delicate question," he said. "Late training in my room. A few ladies in my room."

But the scratch will bear watching if it opens up on Saturday.

The UFC also announced that they are planning to do three annual pay-per-view events in Canada as well "Fight Night" cards.


The company's debut in Vancouver was beset by several issues including insurance that were eventually settled by mayor Gregor Robertson, paving the way for the show. Neither Robertson nor UFC President Dana White would say just how much extra insurance cost the UFC for this event, but White admitted it was "a lot more" than other events.

"I have no problem going into any market anywhere to prove this is a real sport with real athletes and nothing bad is going to happen to your city while we're here," White said.

As far as the Franklin-Liddell match goes, most of the attention centered on Liddell's return after nearly being forced into retirement by White, who maintained his big problem was with Liddell's lifestyle, believing he wasn't taking the sport seriously enough to compete at the highest level.

Liddell has whipped himself into fantastic shape, leading many to speculate about how he'll perform on Saturday.