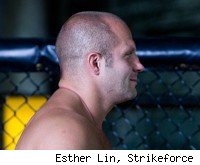 While not officially a "team challenge," the undercard of the Strikeforce: Fedor vs. Werdum event on June 26 in San Jose, Calif. will be filled with five matchups between the M-1 Global and Strikeforce organizations.

M-1 Global representatives will feature veterans of its M-1 Challenge and M-1 Selection series. M-1 will the run the second round of this season's "Americas" series in Atlantic City on the same night as Fedor vs. Werdum and the tournament champions could earn themselves spots on future Strikeforce/Fedor-headlined undercards.

"At the end of the [current] season, at the Sept. 18 event in Atlantic City, we're going to have one champion in the US for every weight class," Kogan said. "Those guys will more than likely go on to fight on things like Fedor undercards and etc. So we're looking to find basically the best up-and-coming fighters from the US.

It should be important to note that the "Strikeforce" fighters will likely be fighters simply pulled from the local area. Strikeforce CEO Scott Coker said Wednesday during a media call that the Fedor vs. Werdum undercard would be comprised of local fighters and that has been Strikeforce's protocol as of late, going as far as recruiting amateurs for Strikeforce Challenger prelims.

The other four bouts should be finalized within the next few days.