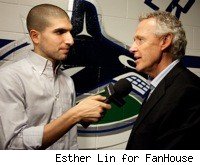 VANCOUVER, British Columbia -- MMA Fighting spoke to Tom Wright, the UFC's new Director of Canadian Operations, following Thursday's UFC 115 pre-fight press conference about the issues the organization had to deal with to bring this event to Western Canada.

Wright, the former Canadian Football League commissioner, also talked about his first 11 days on the job, his first impressions of Dana White what Canadian fans can expect to see from the UFC in the coming years.