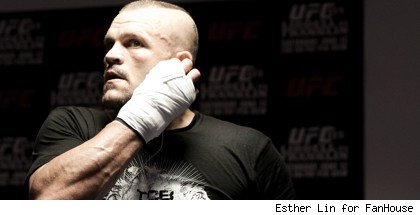 When the UFC president stood up in front of the media after UFC 97 last April and declared that his old friend and employee Chuck Liddell was done fighting forever after his TKO loss to "Shogun" Rua, it's possible he was overestimating his own ability to make life choices for other people.

You can see how that might be a problem for a powerful man like White. Most of the time, when he makes a statement about a fighter's career the mere fact of him saying it out loud is enough to make it so. If he wanted Liddell to hang up the gloves and turn his focus toward spending the mountain of money he'd already earned with his fists, then that's what would happen.

So he thought. So we all did.

Turns out it's not so easy to convince a man to give up the only livelihood he's ever known. Liddell may be 40 years old, and he may be wealthy beyond most MMA fighters' wildest dreams, but inside he's still essentially the same person he was when he made his UFC debut in 1999.

Share That guy just wanted to fight. Not for money or fame, since neither were to be had in the UFC back then, but because it was the only thing he really felt like doing.

Dana White loved that about him. He rarely let a chance go by to talk about what a true, pure fighter Liddell was. Here was a guy who didn't want to handpick his opponents or use fighting as a way to jump into a movie career; he simply wanted to punch people in the face until they fell down.

That's a great employee for an MMA organization to have, at least until you want him to stop.

Like many ex-champions, Liddell has the virtues of his faults. The same traits that enabled him to become a legend of the sport now threaten to keep him in it too long. His body – even the newly chiseled one he's been showing off in advance of his bout with Rich Franklin at UFC 115 this weekend – isn't necessarily in the same place as his mind.

He's a little older and slower than he was way back when, and maybe he doesn't take a punch quite as well, but he still feels like the guy who can walk through fire. They all do, which is why so few fighters leave when they should.

Quite understandably, White wanted to save Liddell from that fate, which is why he tried to forcibly retire him after his second straight knockout loss. Why should he keep getting knocked out well into his forties? It's not as if he needs the money.

That line of reasoning makes sense to White, to the media, to the fans. It just doesn't make sense to the fighter, who would never have reached this point if he judged his career with such a rational calculus. A person who wanted to make money without putting his body at risk would have done something else to begin with, and a person who only did it for the money would have opted out long ago.

But if Liddell can't beat Franklin (a much tougher fight than the original match-up with Tito Ortiz would have been, by the way), don't be surprised if we end up going through this same routine again.

Already White has said that he expects Liddell to call it quits if he loses this weekend. Liddell, not surprisingly, hasn't been so eager to cast this as a win-or-take-up-shuffleboard fight. If he loses a decision, or even if he were to get knocked out after a credible performance early in the fight, it's not hard to imagine him rationalizing himself into another fight. And another. And another.

In a more perfect world, it would be handy to have a powerful third party step in and tell an aging legend when he should find some other way to spend his days. Think of all the boxing greats who might have been able to enjoy their later years if only they'd known when to quit.

But in the real world it doesn't work that way. If all the setbacks, the little injuries, and the losses sustained over a fighter's career couldn't convince him to quit, what chance does another man have? Even a man as powerful as White? He has the ability to tell him that he can't fight in the UFC anymore, but he can't tell him what to do with his life.

Liddell has to make up his own mind about that. If he wins on Saturday, maybe he gets to put the decision off for a little while, but that doesn't mean that it goes away. If he gets one more victory, will that make it possible for him to retire with peace of mind? Or will he want one more, and maybe another after that, and then just one last chance to fight for a title again?

Eventually, one of these fights has to be his last. That day is coming for every fighter, whether they can get themselves to believe in it or not. For guys who have made a career and an identity out of having an unbreakable body and an implacable will, quitting may be the hardest thing they ever have to do.

When the right time finally comes, it may also be the most important.