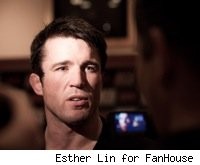 The rash of alleged Twitter identity thefts continues in the MMA world, or so we are told.

The latest supposed victim is top UFC middleweight contender and current Republican nominee for Oregon State Representative Chael Sonnen, who's taking heat in an article today on the Huffington Post for remarks on a Twitter account that purports to be his.

The complicating factor – and this is where the story starts to sound familiar to anyone who followed the Jamie Yager saga last week – is that Sonnen has, according to the Huffington Post, called the account (Twitter.com/sonnench) a fake after he was contacted by reporters about some off-color comments that appear on the page.

Among the ten tweets currently listed since the account was created in February, one refers to Nate Marquardt as "Chief go home Lumpy," four criticize Anderson Silva in some way, two link to Sonnen's campaign website, and one threatens crucifixion for someone named Ed, who may or may not be Silva's manager Ed Soares.

In other words, if the account is a fake, someone is doing a pretty good job of imitating the over-the-top, abrasive tone that the real Sonnen has adopted in recent months.

What's more, an account claiming to be the "Official Campaign Twitter" of Sonnen (Twitter.com/VoteSonnen) is following only one other Twitter user, and you can probably guess which one (hint: it's not the Iron Sheik).

That tends to make one think that either this alleged online impersonator has been very busy creating and then barely maintaining Twitter accounts, or else he's so good that he even fooled Sonnen's campaign.

Whether the account is his or not, the tweets drew the attention of The Huffington Post's Dedrick Muhammad, who called the comments "racist and xenophobic" in an article that questioned why Sonnen's political campaign hadn't done more to distance itself from a supposedly fake account that reflected so poorly on their candidate.

That's one question that springs to mind. Another is, if you were going to create a fake Twitter account for someone, and if that account quickly gained almost 6,000 followers, wouldn't you do more with it? Maybe I don't completely understand the mind of someone who would create a fake Twitter in the first place, but it seems like it's hardly worth the trouble for ten tweets in six months, especially if two of them link to Sonnen's actual campaign website.

Anyone who's watched as Sonnen has gradually adopted a pro wrestling-style persona to help him hype fights and gain notoriety in his UFC career can't exactly be shocked at the comments on the Twitter, none of which seem so different from anything he's said in interviews.

That's one thing for Sonnen the fighter, who fans have learned not to take all that seriously. For Sonnen the political candidate, however, it has the potential to become a bit of a problem if not dealt with quickly.

Update: In this conversation with MMA Fighting's own Ariel Helwani (skip to the 45:40 mark), Sonnen identifies @sonnench as his personal Twitter account. So, case closed on that debate.