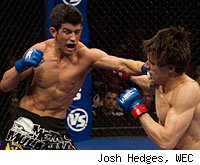 In the long run, it's not clear whether the best WEC cards will be on pay-per-view or on Versus -- or even if the WEC will stick around as an independent entity, separate from its big-brother promotion the UFC at all. But in the short term, the WEC is laying the groundwork for one of the best fight cards of the year in August, and not on pay-per-view.

WEC 50 is expected to take place August 18 on Versus, with bantamweight champion Dominick Cruz confirming on Twitter that he's defending his belt against Joseph Benavidez, and Urijah Faber reportedly ready to make his bantamweight debut against Takeya Mizugaki.

Those are pay-per-view worthy fights. Cruz and Benavidez are the two best fighters in the world in their weight class, and in my opinion two of the Top 10 pound-for-pound fighters in the world. Faber is still by far the WEC's biggest draw, and seeing him move down to bantamweight to fight an exciting opponent in Mizugaki is a very big deal. Those are great fights for basic cable.

That's not to say we're always going to get great WEC fights on basic cable. If Faber and Cruz both win, I think the WEC would put them in the cage together for a bantamweight title fight, and that would likely be on pay-per-view.

But for now, the WEC isn't done putting big fights on Versus. That's very good news for fans who are worried about getting priced out of the best fights.