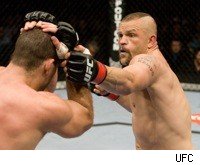 With UFC 115 in Vancouver just a few days away, Matt Erickson and I put the terrifying power of our brains together to figure out exactly what's at stake on Saturday night, as well as what should come next once the dust finally settles.

While we may not have arrived at any conclusive answers beyond some vague fight predictions, we certainly typed a bunch of words. We even made sure to spell some of them right.

1. What's left on the horizon for the winner and the loser of the UFC 115 main event?

Ben Fowlkes: First, let's start with who I see as the most likely winner, and that's Rich Franklin. A win over Chuck Liddell is a nice feather in his cap, but it doesn't mean much more than that. The upside is, he doesn't seem to mind. He's not obsessed with a title shot at 205 pounds, and he instead appears as though he's content to keep showing up in one-off superfights at whatever (possibly non-existent) weight class the UFC needs him in.

As for Liddell, if he gets knocked out by Franklin he should absolutely retire. Dana White will probably tell him the same thing – again – and Liddell will probably resist the nudge toward the rocking chair, at least at first. Simply put, if Liddell can't win and look good doing it on Saturday, there's no reason for him to keep taking the hits into his forties.
Rich Franklin's legacy in the sport is firmly cemented at this point.
-- Matt Erickson
Matt Erickson: Rich Franklin's legacy in the sport is firmly cemented at this point (when your only losses are to Lyoto Machida, Anderson Silva twice, Dan Henderson and Vitor Belfort, you've probably done OK for yourself), but it's not beyond the realm of possibility that Franklin puts a career-twilight winning streak together for one last shot at a belt. But that doesn't seem overly likely. I think, win or lose, we'll see him in these types of main events again, paired up against other legends. Might we see him down the road against Randy Couture, as has been talked about? Against Tito Ortiz if he comes back from surgery? Forrest Griffin? Nothing wrong with fights like those, even if they don't lead to a title shot. As for Liddell, if he wins, he'll have made a great case to Dana White that he wasn't ready to hang 'em up to begin with. And if he loses, I fear we'll be right back where we were a year ago -- with White wanting him to be done, but Liddell falling prey to his competitive nature and begging to get back in there.

2. Is Cro Cop done in the UFC if he loses to Pat Barry?

ME: It's certainly possible. After he returned to the UFC and beat Mostapha Al-turk, he signed a three-fight deal. Unless that has been altered, this should be the last fight on that deal. His loss to Junior dos Santos last fall was ugly. And bizarre. His win over Anthony Perosh at UFC 110 was expected considering Perosh took the fight on only a couple days' notice.


Share
A loss to Barry drops him to 3-4 in the UFC and could confirm to most that either Cro Cop's time has come and gone, or he was a legendary fighter outside the UFC who has what it takes to be merely an up-and-down heavyweight in the Octagon. For Cro Cop from a mental standpoint, it would be interesting to see how he responds to a loss against someone who admits to idolizing him. That makes for quite an interesting storyline on Saturday -- not teacher vs. student, but, to borrow from Dale Doback, the old bull against the young calf.

BF: I don't know if Barry still qualifies as a young calf since he's 30 years old, but he sure kicks like some kind of large, hoofed animal. I can't help but think that he's going to put one of those kicks upside Cro Cop's head at some point, and perhaps no one will be sadder than Barry to see the Croatian fall.

As far as I can tell, Cro Cop may already be done. It just doesn't seem like he wants to be in there the way he used to, and that's a problem. Barry is faster, more dynamic, and most importantly, he's hungrier. He's going to put Cro Cop away, and after he does the UFC will see the writing on the wall. Let's just hope Cro Cop sees it too.

It's not just a sentimental concern, but a practical one. Where do you train for one another if you both call the same gym home?
-- Ben Fowlkes 3. Tyson Griffin and Evan Dunham are two of the most notable teammates to agree to a UFC fight against each other. Is that a sign of the future in MMA, or just an aberration?

BF: I know Dana White would love for this to be a harbinger of things to come, but I doubt it. You can make young guys on "The Ultimate Fighter" face off against teammates, because they really have no choice. You can even talk guys like Griffin and Dunham, who are more training partners than teammates, into the occasional intersquad bout. But that doesn't mean this phenomenon will take hold.

It's not just a sentimental concern, but also a practical one. Where do you train for one another if you both call the same gym home? Who's in your corner on fight night? Do you each recruit people from the audience to hold your respective sponsor banners, or do you just use supermarket twist ties to make them stay up? This might happen from time to time with guys from the larger, less team-oriented gyms, but the more committed squads at AKA and Greg Jackson's will still avoid it.

ME: It's an aberration. I'm not saying I don't think it will ever happen again -- the sport isn't going anywhere, so it's bound to pop up from time to time. I think it may be easier coming from a gym like Xtreme Couture, where Griffin and Dunham call home, because, as you say, they're less teammates than they are training partners. I don't think we're going to see the AKA welterweights fighting each other any time soon -- Josh Koscheck, Jon Fitch and Mike Swick aren't meeting each other as long as that team stays intact.

I side with the fighters who won't fight a teammate on this issue. And most of the time, there are plenty of fights to go around in the UFC for everyone. But if Koscheck beats Georges St-Pierre and Fitch keeps winning, then you better believe we'll be talking about this again.

4. Paulo Thiago is 3-1 in the UFC with an impressive win over Mike Swick in his last fight. If he beats Martin Kampmann, what's next for the Brazilian commando?

ME: The great thing about Thiago is, despite three very solid wins -- and going 2-1 against AKA -- he's managed to slip under the radar just a little bit, at least to the more casual fans. Down the road, I think a rematch with Jon Fitch, the only blemish on his record, would be outstanding. But until then, there are plenty of interesting matchups the UFC could give him. Thiago's submission mastery and Dan Hardy's ability to withstand submissions the way he did against St-Pierre could make for a great challenge.

But if he beats Kampmann, I'd love to see him against John Hathaway, who just looked really impressive beating Diego Sanchez last month. But regardless of who they put him up against, a win Saturday and one or two more after that, and I think this time next year we're talking about Thiago in a title fight.

BF: Your description of Thiago as an under-the-radar prospect is right on, but I still have concerns about his wrestling ability. Unless Georges St. Pierre, Josh Koscheck, and Jon Fitch all die in a plane crash (and my understanding is that UFC policy prohibits them all from traveling together for this exact reason), there's no way anyone's going to wear the 170-pound belt unless he's got superb takedown defense and/or world-class wrestling skills.

I don't think Thiago has either, at least not yet. His win over Koscheck still seems like the result of a fairly lucky punch to me, and if they met again I'd lay money on Koscheck to grind out a decision.

I agree, though, that Hathaway would be an interesting fight for him if he gets past Kampmann, which I think he will. I'm not sure that bout would tell us for sure who the next contender is, but at the very least it would tell us who it isn't. Plus it would be fun, and I love fun.

5. Are we able to officially call the loser of Ben Rothwell-Gilbert Yvel a "bust" in the UFC? Both are high-profile pick-ups with fairly distinguished careers outside the promotion. Or does the loser, who will drop to 0-2 in the UFC, get one more chance?

BF: Unless the loser looks absolutely horrendous in defeat, I'd like to see either of these guys get another shot. The UFC can always use big, exciting kickboxer types, and even with one more loss either man could still serve to spruce up a Spike TV Fight Night card. That said, you don't want to rely on the patience and temperance of the UFC if you're winless in the Octagon. Best to consider this a loser-gets-fired match and fight like your job depends on it, because it very well may.

ME: I don't think either of them would be dropped with a loss on Saturday. But if they were to follow that up with a third, look out. I think this fight is way more crucial for Rothwell, though. He didn't look great in his UFC debut against Cain Velasquez, and that was followed up with an 11th-hour illness pullout from a fight with Mirko Cro Cop at UFC 110 in February. He needs a win, and he needs to look good doing it. But considering neither of them lost their debuts to a pair of pushovers -- Velasquez for Rothwell, Junior dos Santos for Yvel -- we can consider that first-fight hazing. I think we'll see a third fight for the loser in the UFC, but it might be on the prelims.