Scott Coker Says Fedor PPV Is Possible, but Too Early to Tell 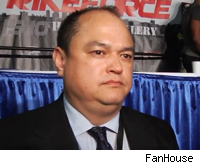 Strikeforce CEO Scott Coker admitted Wednesday during a media call that the promotion could be considering a leap to pay-per-view depending on the result of Fedor Emelianenko vs. Fabricio Werdum on June 26.

"If Fedor still has an unblemished record, does it make sense to go into the pay-per-view business? I would say, 'probably,'" Coker said. "But that's assuming a lot, because Werdum is a credible opponent. Should he beat Fedor, then maybe it's a different story."

The potential pay-per-view fight would be Fedor's final Strikeforce one on his current contract. Under the current deal, Fedor is obligated to fight three times under the Strikeforce banner.

"From Showtime's standpoint I'd say let's get through June 26 first, as Scott alluded to before. The fights are the fights," Hershman said. "As far as pay-per-view, that's something we'll have to cross the bridge when we get to it."

Strikeforce and Showtime understandably are taking the safe approach here since they've already been stung before by the anything can happen nature of MMA. Despite being favored to win, Strikeforce's major signing Dan Henderson lost in his Strikeforce debut in April on CBS to champion Jake Shields, who was on his last fight on his contract with all signs pointing towards a signing with the UFC.

Other notes from Coker:

-- Coker spoke with Bellator CEO Bjorn Rebney recently and there will be no Eddle Alvarez vs. Gilbert Melendez superfight for the time being for the simple reason that Melendez will be out of action until November or December.

-- Strikeforce's June 16 show came about from the promotion's relationship with EA Sports from the EA Sports MMA video game. There will only be two fights on the undercard featuring local fighters in support of the main card headlined by Robbie Lawler vs. Renato "Babalu" Sobral. It will also be atypical of other Strikeforce events in that the fights are being held in an auditorium setting at the Nokia Theater in Los Angeles. Coker also said he's been pleased with ticket sales.

"The venue holds about roughly 7,200 people, including the stage setup and I think we're about two-thirds there," Coker said.